Lucky for the vegan-inclined, there are impossibly tasty chicken sandwiches beyond Popeyes and Chick-fil-A, and no animals were harmed in the making of them. Not only are these 16 vegan twists on the classic chicken sandwich better for you, but they’re much kinder choices for the animals and the planet, too. And if you think you’ll be sacrificing taste or texture by biting into one of these bad boys, you’d be wrong. Bring a friend and a napkin—your taste buds (and your worldview) will never be the same again.

This soul food pop-up may have engineered the perfect fried chicken recipe, and it just happens to be plant-based. The company was not only the first vegan chicken producer to enter the competitive National Fried Chicken Festival in New Orleans in 2018, but it was also deemed Best Dish by Extra Crispy editor Ryan Grim. The menu has expanded from buckets to buns—putting its finger-licking, crispy-on-the-outside, juicy-on-the-inside vegan chicken between slices of bread. In between its sprawling pop-ups, Atlas Monroe markets its famous chicken online for nationwide shipping. Cooks, to your dredging stations! There are a lot of orders to fill. 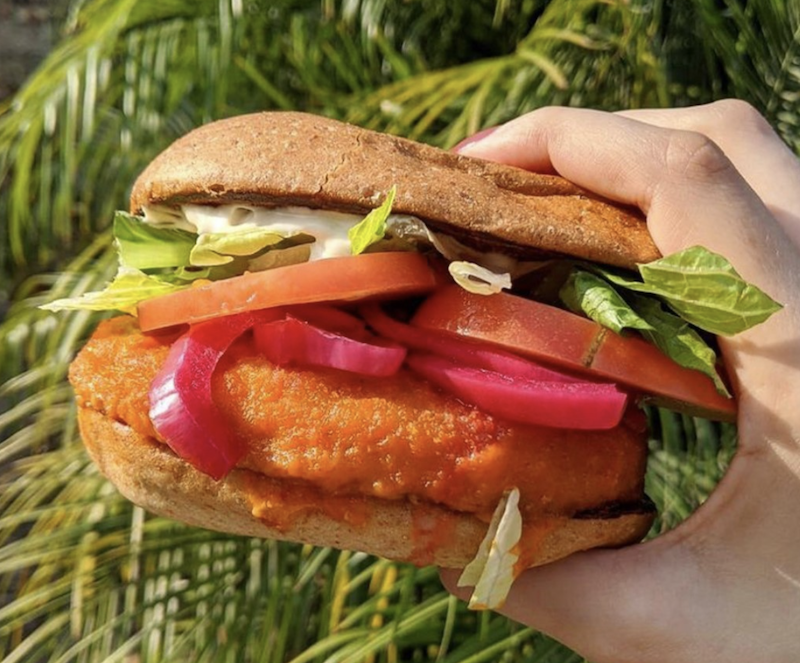 One of the earliest vegan restaurants to compete in the chicken sandwich games, Veggie Grill’s signature menu item rivals even the buzzy newcomers. For over a decade, Veggie Grill has been the place where omnivores gently place their hand on their vegan friend’s knee, look them in the eye, and say, “This isn’t vegan.” The chain’s new slogan should be, “Veggie Grill: successfully duping omnivores since 2006.” The Sante Fe Chickin’ is a standout sandwich comprised of a juicy, meaty chickn’ patty, romaine, sliced tomato, red onion, mashed avocado, and spicy mayo on a toasted wheat bun. Dare we say it rivals Wendy’s chicken sandwich? Yes, yes we do. 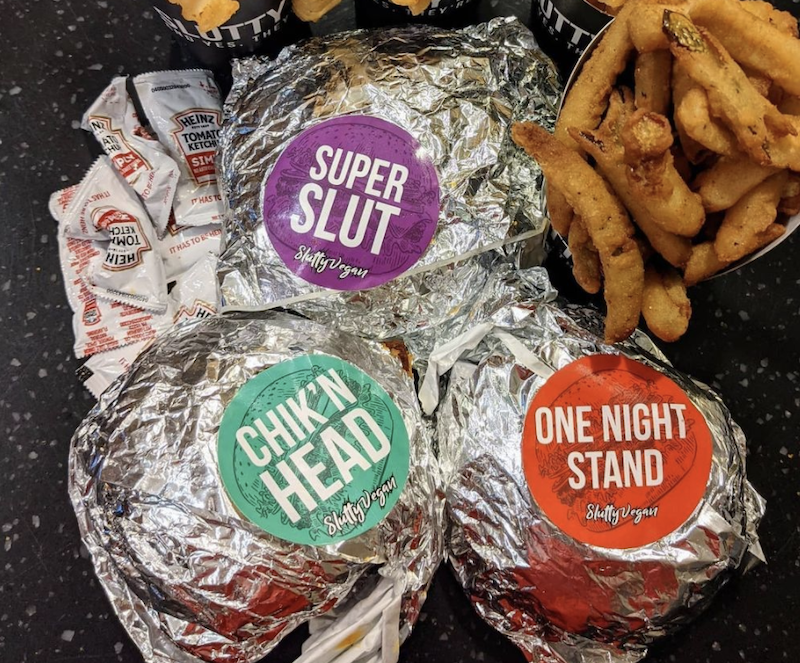 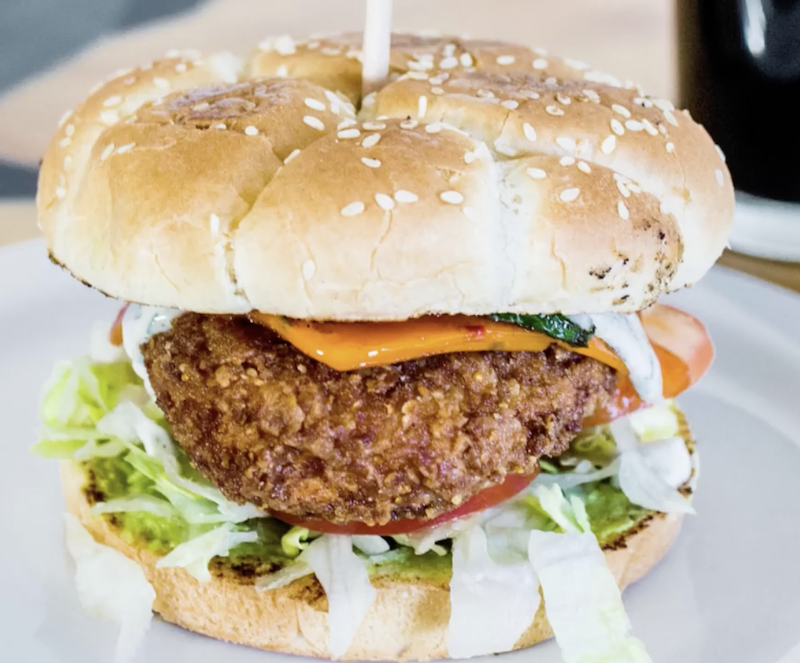 A play on a certain fast-food chain featuring a red-headed female mascot, the Wendy’s Pickle sandwich outshines the original. With only a few pickles, hot sauce, and mayo to accompany it, the southern-style breaded vegan chicken patty is truly the star of the sandwich. The toasted ciabatta bread acts as the perfect serving vessel. Order with one of the unique sides such as the thyme fries, fried brussels sprouts, tahini coleslaw, fruit, or Grandma’s Chili. 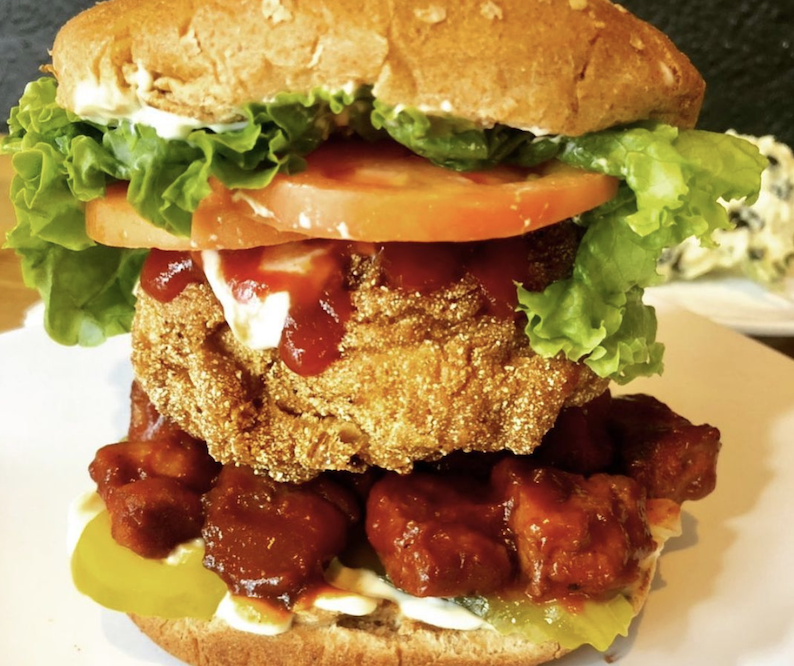 If plain isn’t your game, Souley Vegan’s Proud Mary might just suit your style. The sandwich starts off with a plant-based, crackly-yet-tender chicken patty schmeared with special sauce and barbecue sauce then topped with tomato slices and romaine. Ok, fine, nothing too special here. Underneath that chicken, however, is a thick layer of crispy barbecue tofu, pickles, and more special sauce. This monstrosity is barely contained between a soft cracked wheat burger bun. There are two ways to tackle this sandwich: take a knife and fork to it or unhinge your jaw. 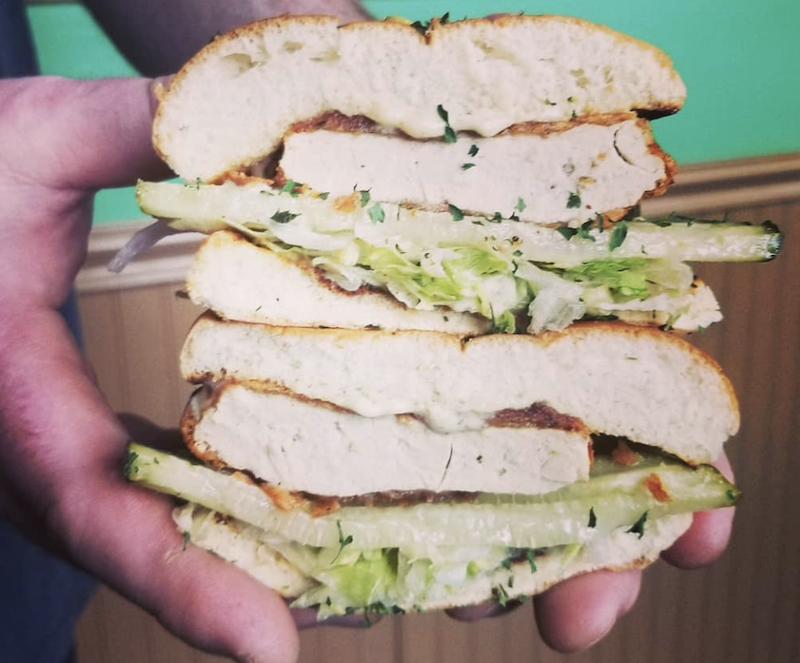 Wayward is serving up classic American diner food at its best—large portions, affordable prices, and a down-home atmosphere. Here, you can get your fried chicken sandwich fix for breakfast, lunch, or dinner. In the morning, order The Freebird—an open-faced homemade herb biscuit sandwich made with the diner’s signature battered and fried Southern-style chicken, country gravy, onion frizzles, and flowering kale. For lunch or dinner, try the Southern Comfort, Chico Vegan Melt, or Southern Belle which features a generous scoop of potato salad on top of a ranch and barbecue-slathered fried chicken patty. Why not put your side in your sandwich? 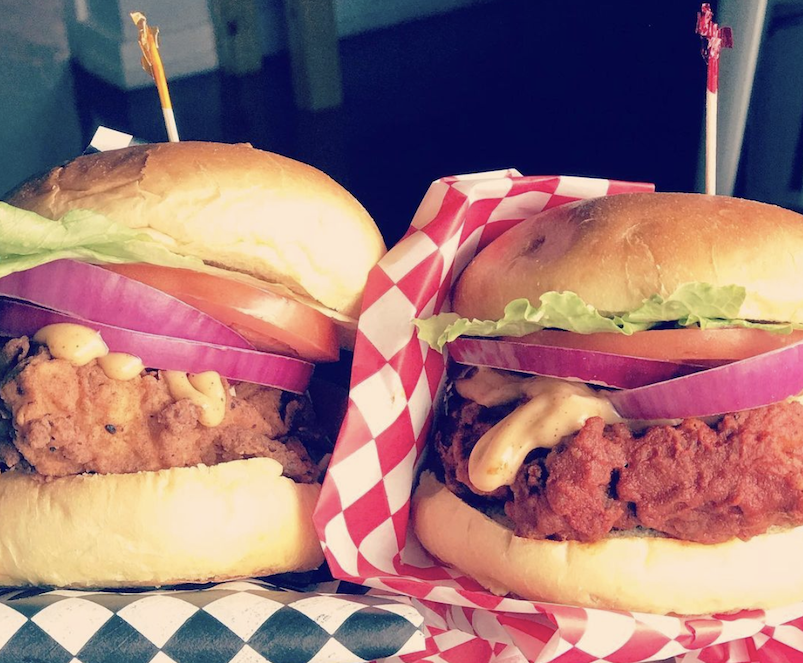 The country music capital’s first vegan restaurant offers a bit of Southern charm along with a great fried chicken sandwich. Diners have two options—the reliable Chick’n Sandwich simply stacked with a seasoned and fried seitan-based chicken cutlet, chipotle mayo, lettuce, tomato, and onion; or the ‘Nashville’ Hot Chick’n Sandwich that includes all the above with a significantly spicy hot sauce. Pair your sandwich with a complimentary Southern-style side from mac and cheese to turnip greens.

Sometimes you just crave a classic chicken sandwich, and J. Selby’s Crispy Chickin Sandwich will satisfy your tastebuds. This hot handhold consists of a perfectly fried and battered, crispy-on-the-outside-and-moist-on-the-inside plant-based chicken patty topped with lettuce, sweet pickles, and mayo on a whole-grain bun. 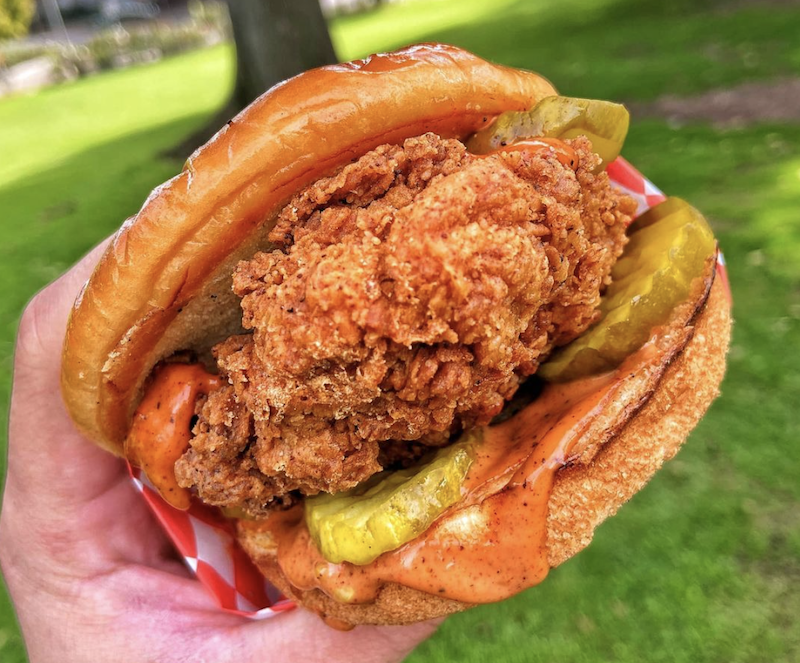 Truth be told, this vegan food truck goes relatively light on the lettuce. It’s all about that crispy, crackly vegan fried chicken. Wait patiently in line for your Nashville Hot Chicken Sando or OG Sando and try the Ghost or Reaper dippers, if you dare. Both are made with the company’s homemade crispy chicken patty and vegan butter bun—though the OG is paired with lettuce, tomato, and “honey” mustard, while the Nashville comes with slaw, ranch, and your choice of hot sauce. Again, there’s no need to be a hero. The OG, Mild, Medium, and Hot Honey sauces are spicy enough. Only true heat-seekers should take on the more advanced hot sauce dipping options. 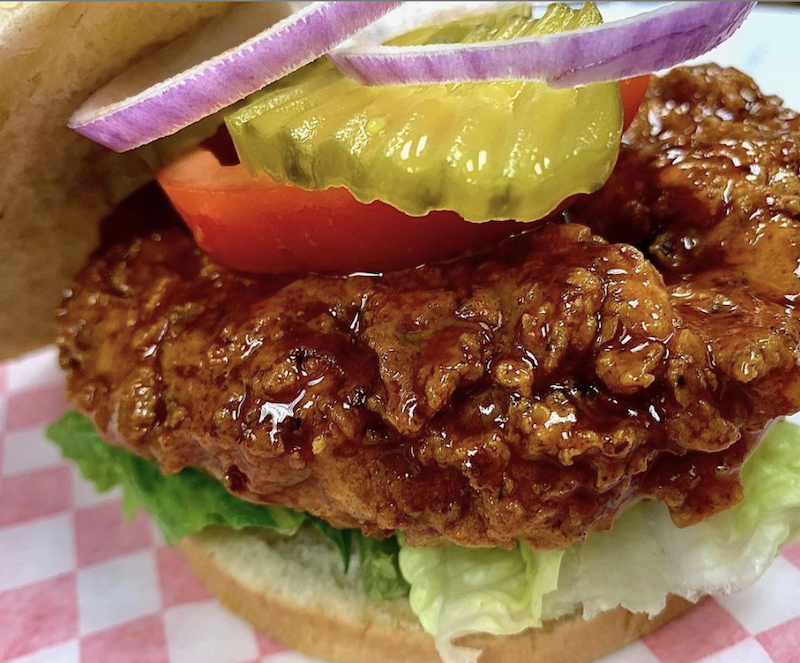 If Chef Velvet and Colonel Sanders squared off in a fried chicken sandwich duel, there’s no doubt Chef Velvet’s vegan version would reign supreme. Her extra crispy, plant-based fried chicken breast is seasoned to perfection and needs no adornment beyond a simple, squishy bun. Having made her mark in Charlotte, the chef crossed the country to open another soul cuisine spot in Los Angeles, shortening the name to VTree and expanding the menu to include a range of foods representative of the Southern Black diaspora. 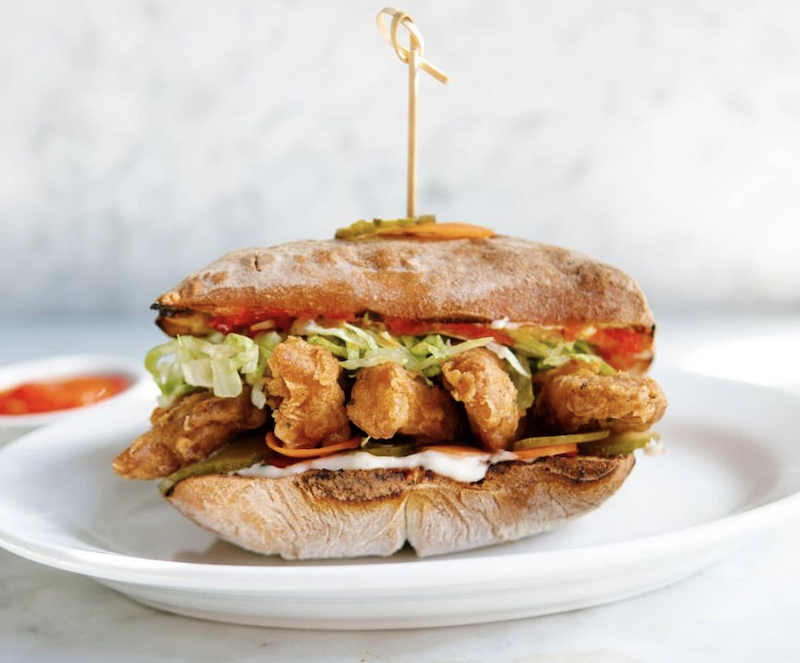 Compliments tend to hold more gravitas when coming from an omnivore, and when that omnivore happens to be a celebrity, you might as well call in the Michelin team to hand out a star. Actor Dan Levy of Schitt’s Creek fame gushed over this plant-based fried chicken sandwich co-created by Discovery Channel host Ziya Tong. The restaurant sources its vegan chicken from Barcelona-based company Heura and coats it in Tong’s top-secret spice blend. The meaty filling is accompanied by preserved chilies, vegan mayo, shredded lettuce, and pickles all held together by a crusty ciabatta roll. 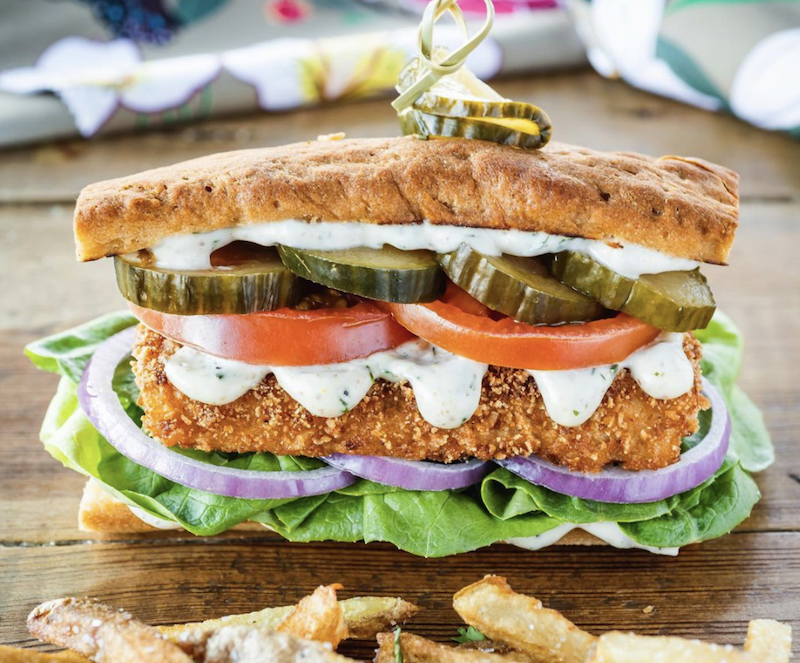 Tofu is a trickster—you’d never know this succulent, fried patty was soy in disguise. Modern Love’s take on the classic pairs fresh ingredients with golden-fried lusciousness and douses both sides of its ciabatta bun with creamy vegan ranch. You heard right—double ranch. Need we say more?

Residents of Washington, DC and Philadelphia rejoice: this decadent sando is in your neck of the woods. Sink your teeth into the Crispy HipCity Ranch sandwich. It’s got all the classic toppings—lettuce, tomato, onion, and pickles—but the peppercorn ranch offers a pleasant touch of heat without moving into Nashville hot territory. Order the chain’s signature Banana Whip for a light, sweet end to your meal. 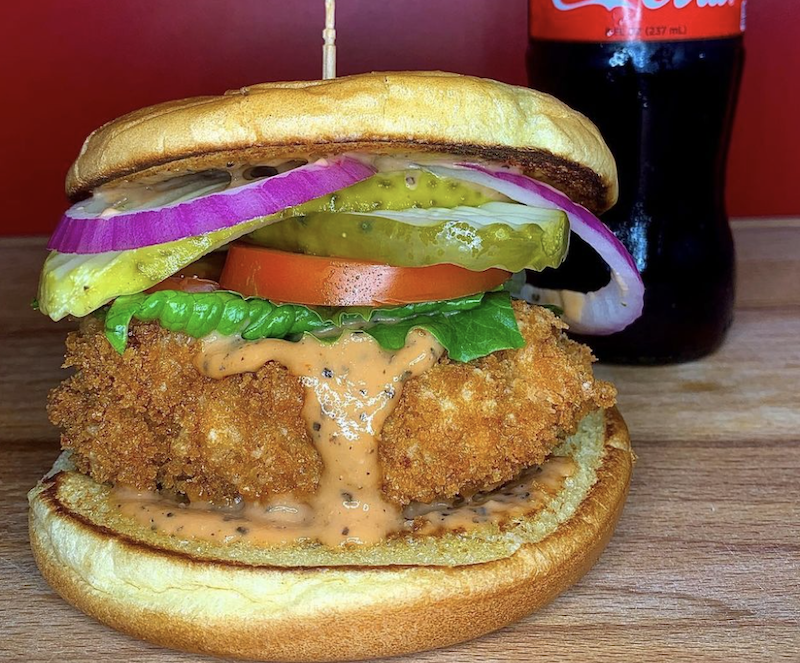 Arguably some of the best food comes from a truck. Launched by two young vegan entrepreneurs craving comfort in their college town, this middle-of-America kitchen on wheels serves the best vegan kitchen sandwiches around (and it’s not just because they’re the only vegan concept around). Their chickenless sandwich menu allows patrons to customize their handhold with a variety of sauces and heat levels. Dare to go spicy or slather on the Eat Mor Chkn sauce that will remind you of a certain non-vegan chain that’s closed on Sundays. This vegan chicken sandwich is transforming Stillwater into a destination town. 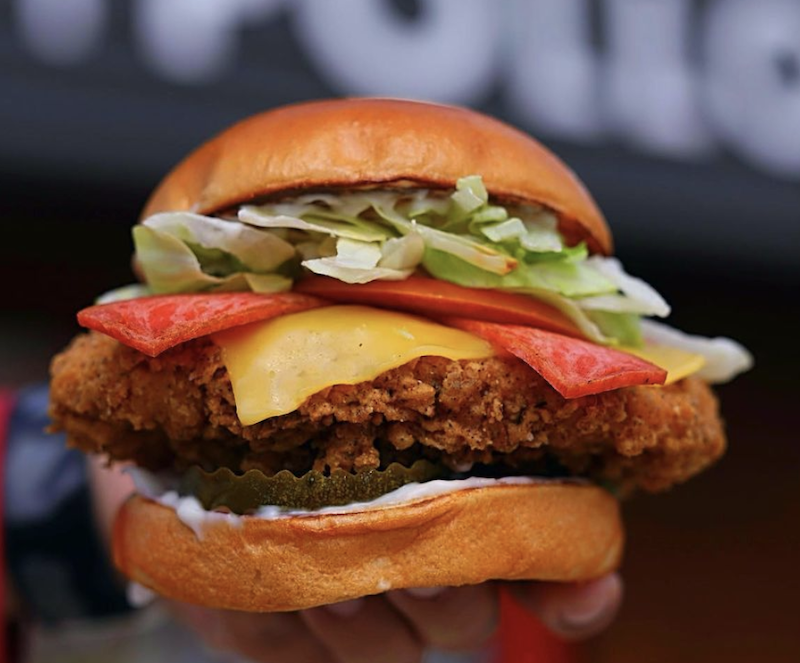 This chickenless chicken chain does one thing, and they do it right. Each menu item features crispy vegan chicken in one way or another, but we’re focusing on the mouthwatering array of sandwiches. Options range from basic (the Original Project) to fiery (Spicy Project) to baconified (The Deluxe). Vegan crispy chicken sandwich with plant-based bacon and melty gouda cheese? Yes, please and thank you. 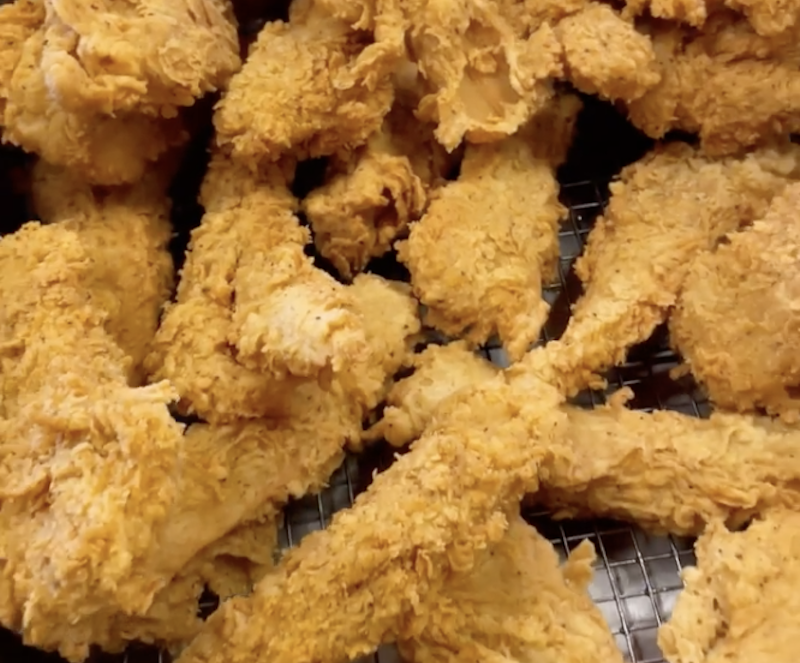 After five years of success, America’s first vegan butchery is expanding. The Herbivorous Butcher co-founders Kale and Aubry Walch aren’t opening another general butcher shop, though. They’re jumping into the vegan fried chicken market. Expect nothing less than an endless line of people spaced six feet apart during the opening weekend (May 21-23). Bring a book or your Kindle, but the wait will be worth it.