This time I used yellow miso which is milder in flavour than the more assertive red miso I usually use, only because red miso was unavailable the last time I bought miso.  Also my homemade miso is far from ready yet needing many more months to ferment.  The furikake I bought for this bake didn’t have the bonito flakes in it so instead was a simpler seaweed and sesame seed.  The furikake is so delicious with just steamed rice and that is what I usually eat it with.

I made a pretty big mistake when mixing this dough.  I was doing my recent overnight process of levain build and saltolyse (salt in autolyse) which I’ve been having very good results with recently.  The main reason for doing this was to give me more time in my day to do other things by having the levain build and be ready by the morning.  However, when I mixed the water into the flours I kind of felt that it seemed wetter than usual but didn’t think much of it because it was late and I was tired.  It wasn’t until the next day after adding the levain and trying to slap and fold that I knew for sure that I had made a mistake somewhere.  In reviewing my notes and formula I realized that I had added the total water which includes the water in the levain instead of the water for the mix.  So the dough was in excess of 90% hydration which for my flours 80% bread and 20% red fife was way too much for them to absorb.  Not sure if this would work, I measured out 75 g of whole red fife and gradually sprinkled this in and mixed until the dough came together.  I added about 60 g of this flour in and did a quick calculation that the hydration was down to 80% but the whole red fife was up to 39%.  So if anything now the hydration is a bit low for the flour.  Oh well, what can you do.  I just hope there aren’t pockets of raw flour or bits of hard dough in the crumb of this bread.

The resulting dough was over 1 kg so the largest loaf I’ve made.  I wasn’t expecting much from this but I think it turned out better than expected considering the early error I made, but the crumb will tell all.

Miso was increased to 5.6% to try to bring out the flavour.  Furikake was added during the lamination but I forgot to add more after the letterfold so there still isn’t as much as I had planned. 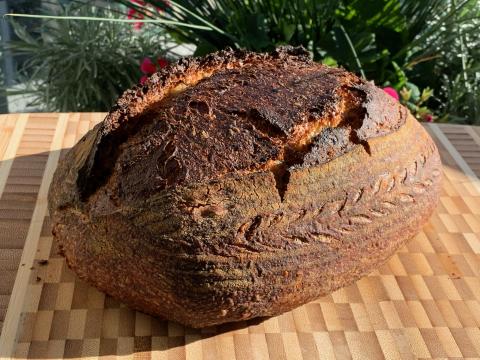 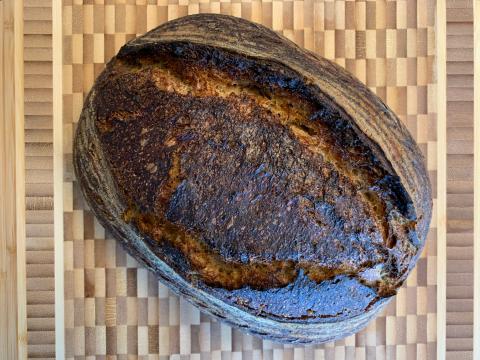 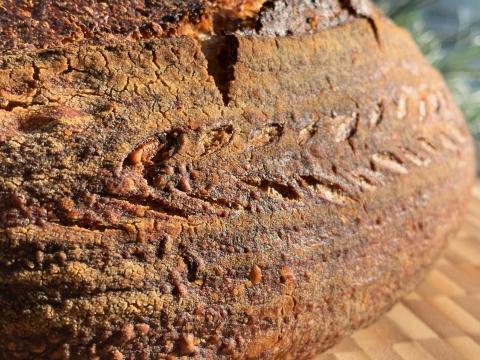