Vegan Rasmalai Cake is a dairy-free spin on the popular Bengali Dessert rasmalai that is typically served for Diwali! Moist almond and cashew flour cake squares immersed in a rich and creamy cashew pistachio “milk” scented with saffron and cardamom. Jump to Recipe

Diwali is coming up and that means Boxes of sweets and desserts being whipped up to share and celebrate. A festival that celebrates a win of goodness, knowledge, kindness over negativity. This Diwali we need that magic.  This vegan Ras Malai Cake is a simple dairy-free spin on one of the most delicious Indian sweets out there – the traditional Bengali Dessert Ras Malai / Rasmalai.

Bengali Rasmalai consists of small soft cheese curd/paneer balls or cakes immersed in saffron and cardamom-scented sweetened thickened milk. This Indian dessert is usually served with plenty of chopped pistachios and as you can imagine, it’s a pretty popular dessert for the holidays! 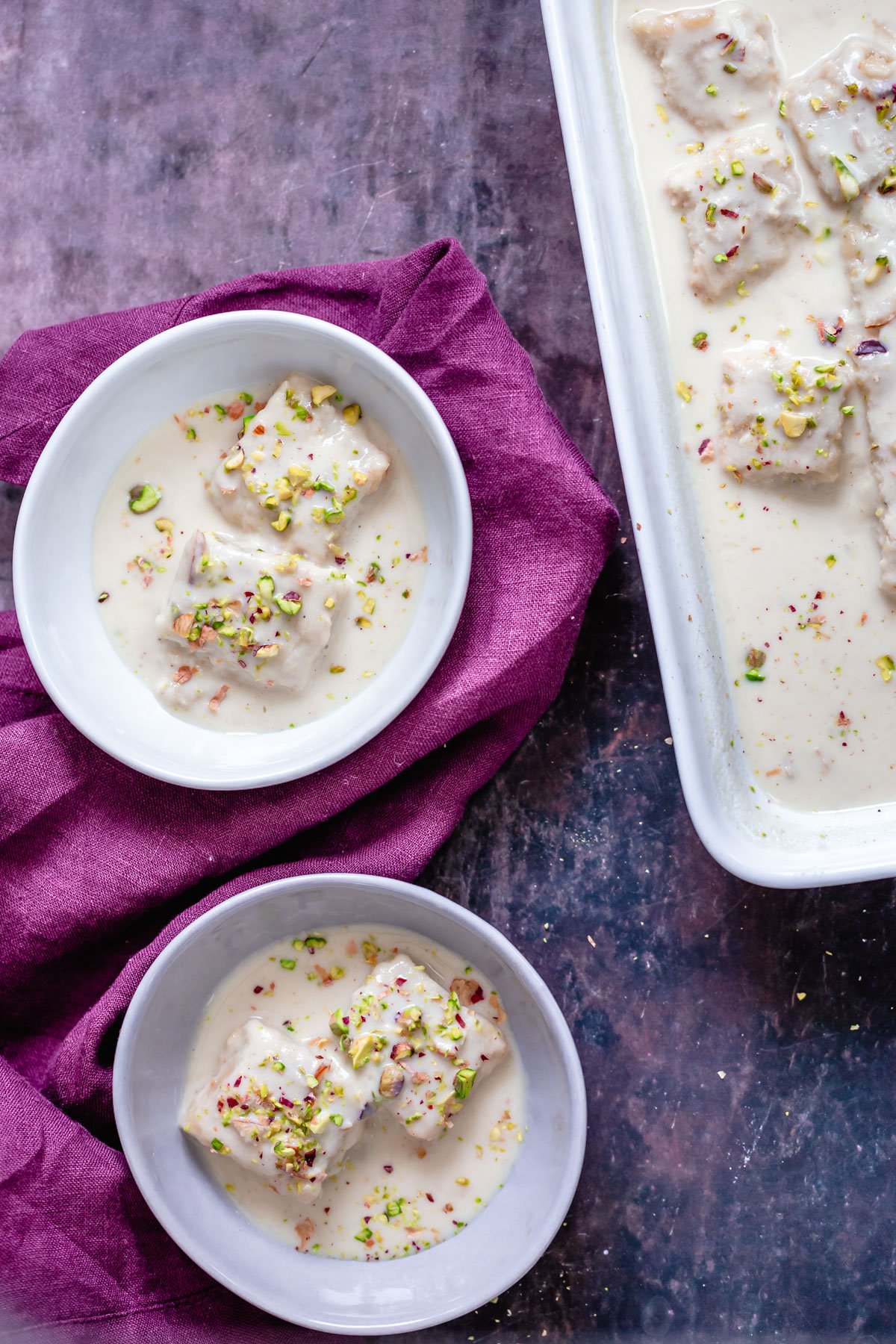 Vegan version of rasmalai is tricky. The chewy cheese balls are hard to mimic with non dairy cheeses. I have a soy based version in my cookbook. That is chewy and cheesy and almost perfect, but has a slight soy after taste. Today I bring you this variation. This Vegan Ras Malai Cake consists of a moist vegan nut cake which is like malai burfi/milk cake immersed into a rich sweetened cashew pistachio cream. We make the burfi cake, we pour cream on top, we let the cake soak up some of that goodness and it’s ready to serve. No fuss, no stress! The flavors of rasmalai all come from the amazing malai cream sauce and  satisfy that ras malai craving.

Rasmalai is a decadent Indian treat served for special occasions like weddings or for Diwali. Due to its richness, it’s not an everyday kind of dessert – which doesn’t mean it’s overly difficult to make – and this vegan version is even easier. You can whip this Vegan Rasmalai Cake up pretty effortlessly and you’ll even find it quite relaxing during the stressful holiday season.