Make your own vegan Nilla wafers at home – you might even already have all of the ingredients!

Honestly, as much as I used to love the classic store-bought Nilla wafers, somehow these homemade and vegan ones are even better.

I’m really not sure how that’s possible, but it’s true.

The recipe calls for just a few basic ingredients, and they taste like mini vanilla sugar cookies!

I made the vanilla wafers to go along with a vegan banana pudding recipe that I’m hoping to publish next week.

In the meantime, they’re also fantastic with this Healthy Chocolate Pudding.

Not sure who first decided to try Nilla wafers with pudding, but the two desserts are clearly meant to be together!

(You can also make larger cookies and dip them in cinnamon sugar.)

Aside from eating plain or with pudding, these cookies can be used in any recipe that calls for packaged vanilla wafers.

Or crush the cookies and use instead of graham cracker crumbs in parfaits or as a no-bake crust for lemon bars, cheesecakes, or this Pineapple Fantasy Pie.

Above – Watch the video of how to make vegan nilla wafers

The recipe was adapted from my Vegan Sugar Cookies. 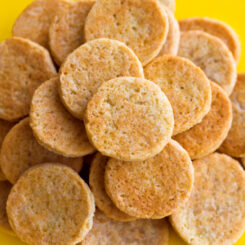 These cookies can also be used in place of graham cracker crumbs in recipes. Try them as a base for my Vegan Cheesecake!