Many families have unique holiday traditions, and mine is no exception. I can summon vivid childhood memories of family outings to choose and fell a tree at the farm, then decorating it with “my” ornaments while listening to Manheim Steamroller’s version of Deck the Halls (what a classic!). But there is one family tradition that, more than any other, conjures up the vivid smells and tastes of Christmas: the stollen that my German-American grandmother baked yearly, and the baking tradition that she passed to her descendants, wherein we bake loaves of stollen to share with our friends and neighbors during the holidays.

The baking enthusiasts on this site need no explanation for what stollen is, but this year I’ve looked a little more into its history. The city of Dresden claims to have been baking Christmas stollen from the 15th century, originally with just a few spartan ingredients, in observance of Advent fasting requirements. Over the centuries it’s become a richer holiday bread, in a category with panettone and fruitcake, baked with candied fruit and nuts. It’s distinguished by a dense, but relatively dry texture, a hearty coating of powdered sugar, and the common addition of marzipan. Otherwise, it seems to be a little more loosely interpreted than more strictly regulated breads like panettone. So what you see here might not be quite true to your vision of stollen, but I’ll say it’s close to my family’s typical loaves, and I’m happy with it for that.

I was motivated to try a sourdough stollen for a few reasons–including, maybe, some 2020 bandwagon hubris. However, the additional complexity and the unique hydration of the sourdough made it possible to eliminate eggs from the original recipe, which in turn made it very easy to convert the ingredients to a fully vegan bake, thus allowing me to share with vegan friends. Also, I was intrigued by the thought that stollen has been a “sourdough” bread for most of its 500-plus year history, since commercial baker’s yeast is a recent innovation. So this became a modest experiment in traditional leavening techniques, which have been used to make all kinds of breads for centuries. The dough turns out to be really amenable to wild yeast leavening: a pleasant surprise for my first attempt at converting a traditionally yeasted recipe to one powered by a levain. I’d welcome commentary from those with more experience adapting recipes.

Ahead of time
I was feeling ambitious enough to candy my own orange peel and citron, which I then macerated in brandy for a week or so. Of course, store bought candied fruit would work just as well (but I’d still recommend that boozy soak for flavor). My mom likes to include a “fruit cake mix” in her stollen, for even more colorful candied goodness.

Preparing the levain, baking schedule
Based on the wise words of several TFL members, I began with the presumption that an enriched dough made with a levain would require both a high percentage of pre-fermented flour, and several feeds. I found that for a typical recipe, two feeds spaced 12 hours apart were enough to get mine going. For a larger batch, I added a third feed, for which it only needed about 4 hours to become ripe. I’m using a 60% hydration levain, as I find it much easier to work with as compared to a soupier starter.

As you can see from the table below, it took a substantially long time from start to finish on my latest run, so be forewarned that patience is required. The bulk fermentation is heavily dependent on temperature; on a previous trial run at ~70 F, it was ready for shaping in 8 hours, whereas this latest run at ~60 F fermented for 18 hours. 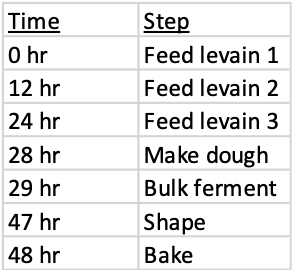 Recipe
Here’s my current recipe for sourdough stollen, for a 1240 g dough beginning with 220 g of ripe levain (all masses are given in grams). 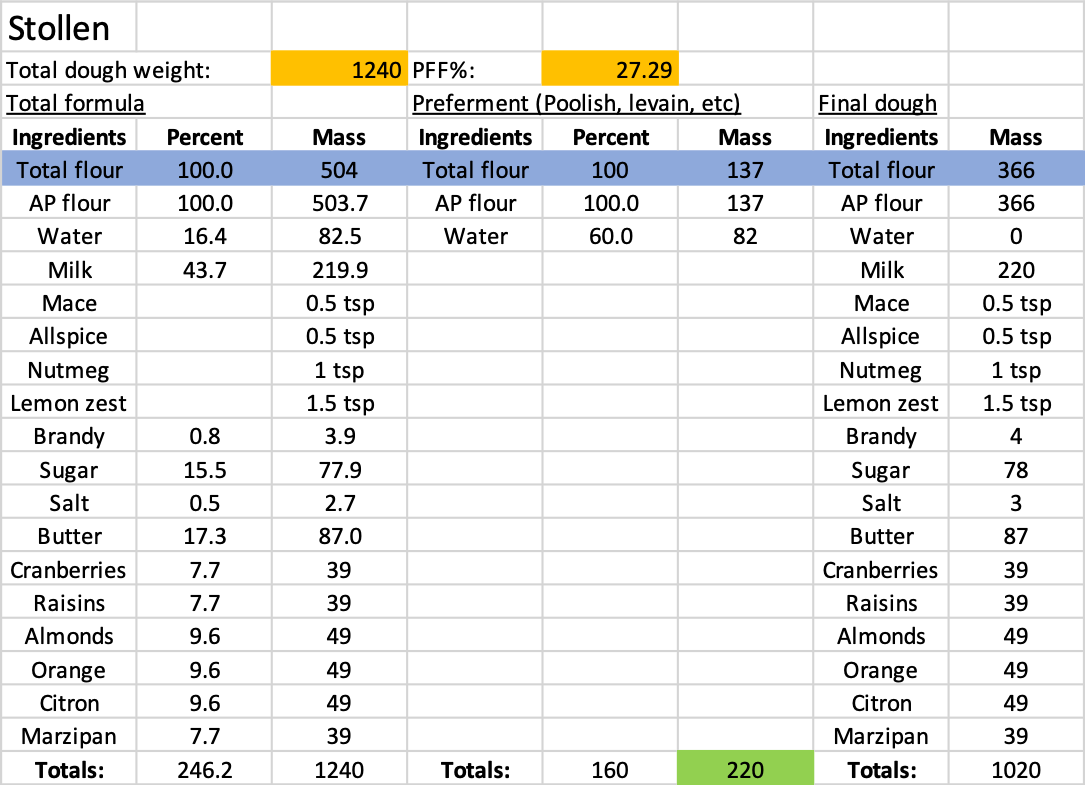 1. Prepare the 60% hydration levain as described above, with 2-3 feeds over 24-28 hours, until it is vigorously active. And don’t forget to soak your candied fruit peel in brandy! Candy is dandy when brandy is handy.

2. When levain is ready, place the required amount in a large bowl. Heat milk to 90 °F and pour onto levain. Add spices, brandy, sugar, and salt, and mix until salt and sugar are dissolved. Then add the flour and work fully into the liquid, until it is a dough of medium consistency with a slight “core” when pinched. 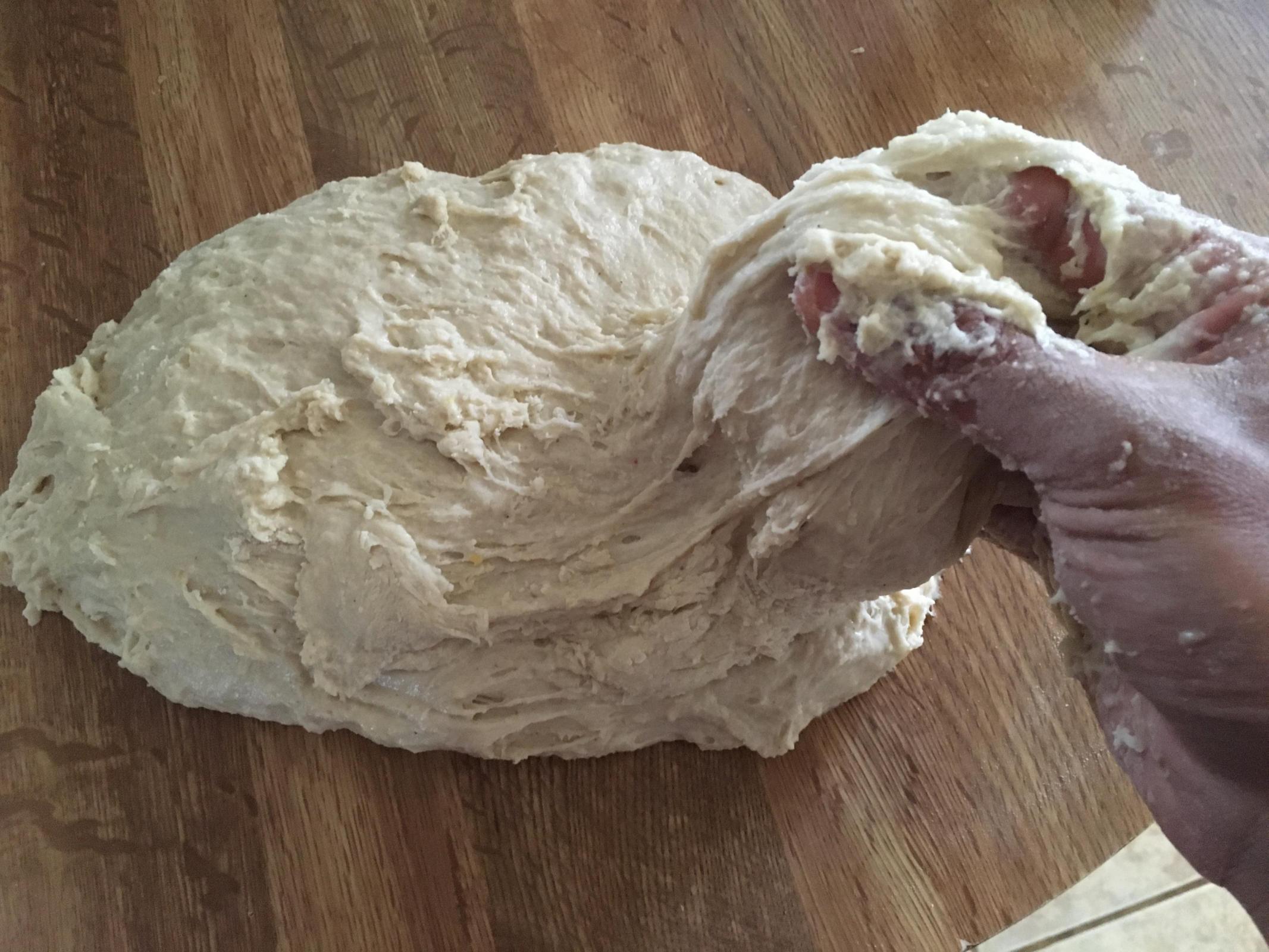 3. Turn the dough onto a countertop, without flour, and knead by stretching and folding for 8-10 minutes, until its texture becomes satiny and it is barely sticking to the counter, if at all. Adding a little flour might be necessary. After kneading, gather into a ball and return to the bowl. Cover and let rest for 15 minutes.

4. Turn onto a lightly floured countertop, flatten, gather into a ball and return to bowl. Let the dough rest for 15 minutes. Remove the butter from the refrigerator at this time. Prepare the dried and candied fruit and almonds (I use pre-sliced, blanched almonds, but if you are using whole almonds, this is the time to chop them).

5. After 15 minutes, use a rolling pin to give the cool butter a few hearty whacks, until it is malleable. Turn the dough onto a lightly floured countertop and flatten. Dab all of the butter into the surface of the dough, pressing small chunks into its surface. Pile the fruit and nuts on top of this and fold the dough over. Then spend 5-10 minutes working these ingredients into the dough, with stretching and folding. The dough will slacken considerably and feel weaker than before, but don’t worry–the gluten will fully develop over the long fermentation. When the ingredients are homogeneously worked into the dough, turn the mass onto a lightly floured countertop, gather into a ball and return to the bowl. Let rest for 30 minutes. 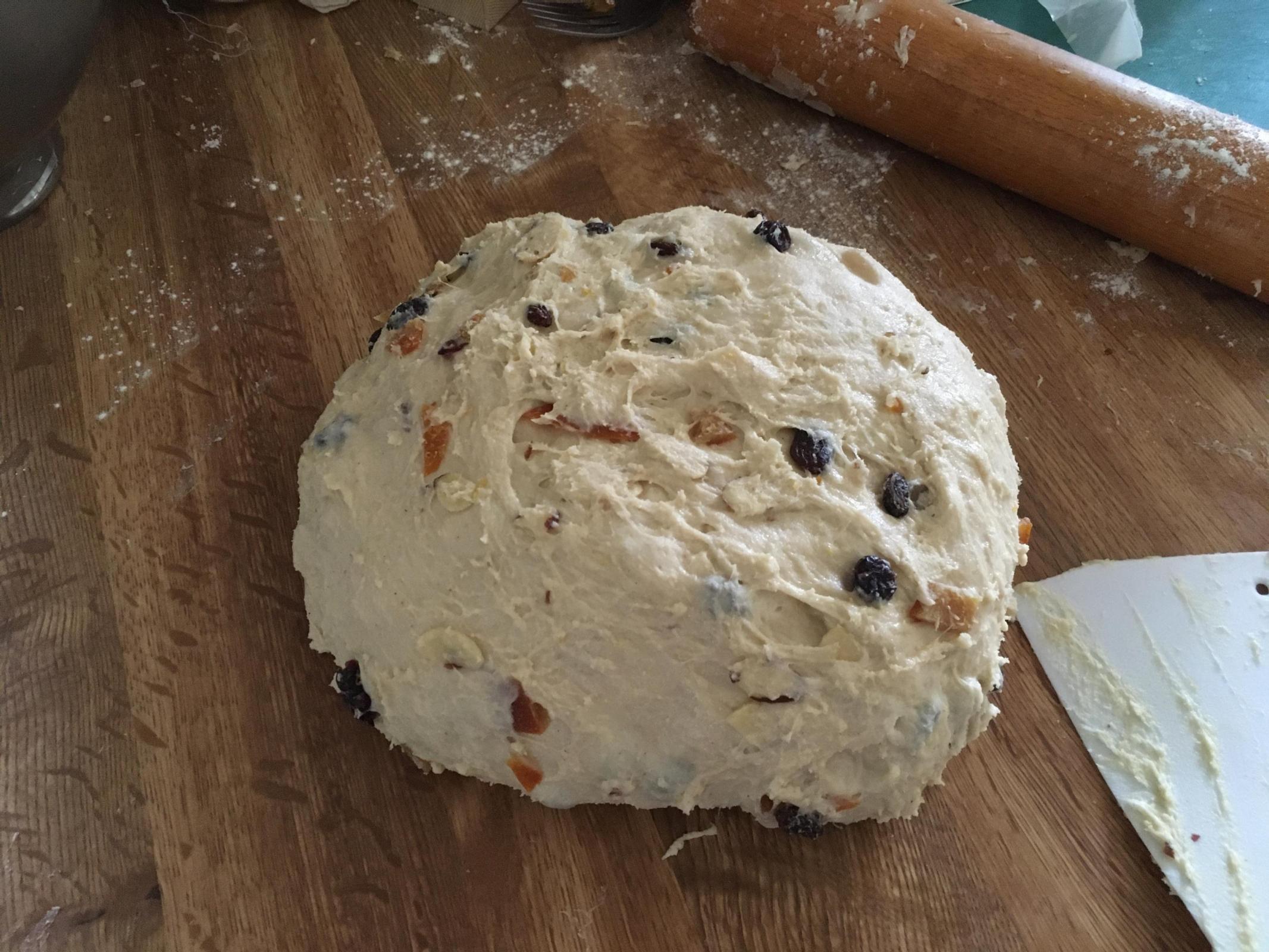 6. After 30 minutes, one last time, turn onto a lightly floured countertop, flatten, gather into a ball and return to bowl. Now the dough is ready for bulk fermentation. In my hands, the bulk fermentation has lasted for anywhere from 8-18 hours, depending on ambient temperature. It should rise considerably, to near double volume. At least once through the fermentation, 4 hours after the final fold, the dough should be turned onto a lightly floured countertop, gently pressed, gathered into a ball and returned to the bowl. If it ferments for longer than 8 hours, do another fold at this point as well.

7. After the bulk ferment, the dough should be glossy and risen to near double volume. Turn onto a lightly floured countertop and divide if desired (I did small, 500 g loaves in this batch, but a family-sized loaf could be a kilo or even more). Gently press to a circle, ~1 inch thick. Then use 2 folds, envelope style, to preshape a rough log. Rest for 15 minutes. 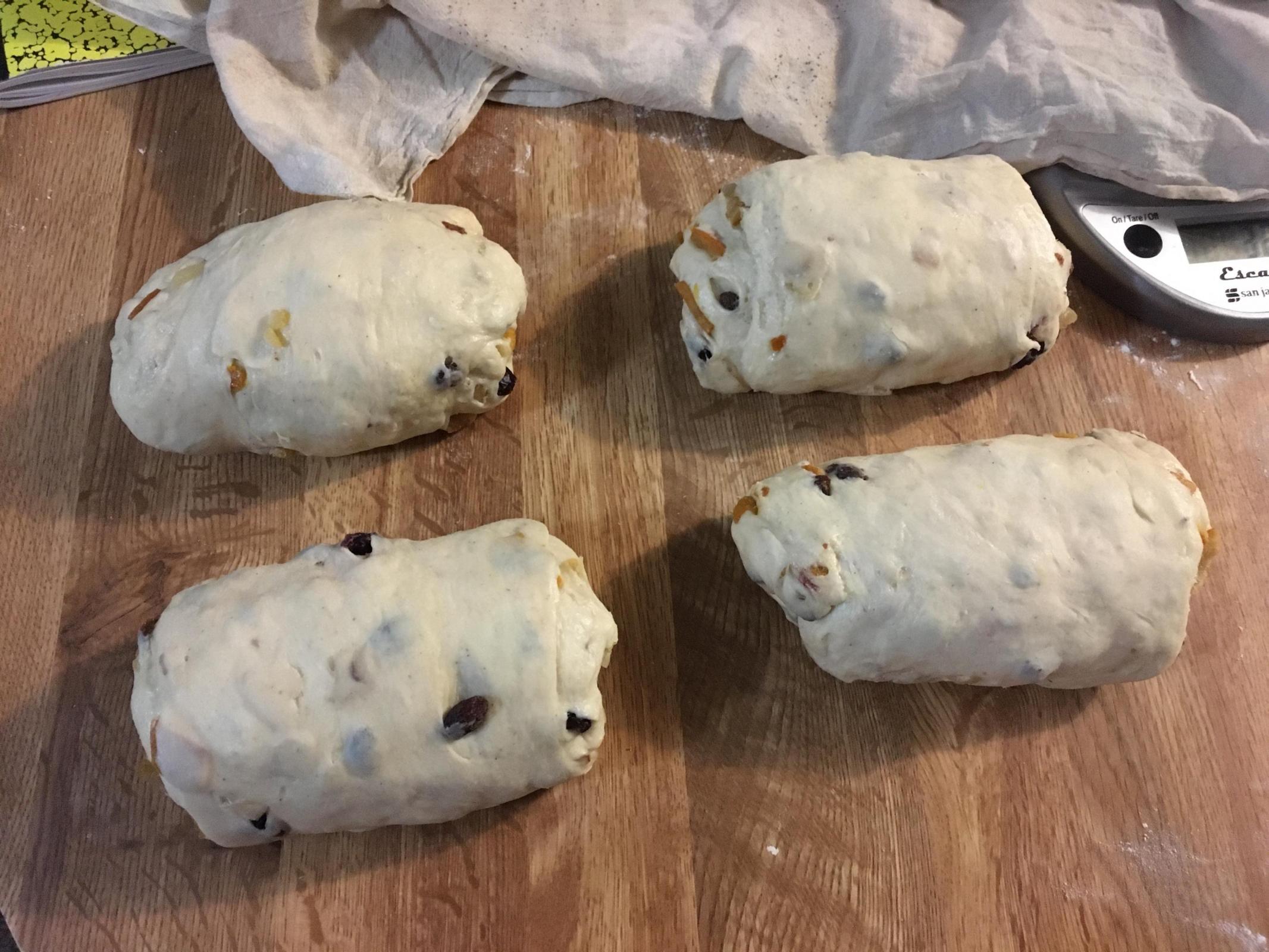 8. Flatten the dough log to a rough rectangle. Grab a hunk of marzipan (40 g per kilo of dough) and roll into a log that is just shorter than the dough’s length. Place it in the middle of the dough log, and fold the dough around with 2 folds, envelope style. Then roll the log with a couple of twists on the counter so you have a just slightly tapered cylinder. Proof in a couch, seam-side up, or shape into a crescent and allow to rise in a bowl or banneton. Preheat the oven to 375 °F. 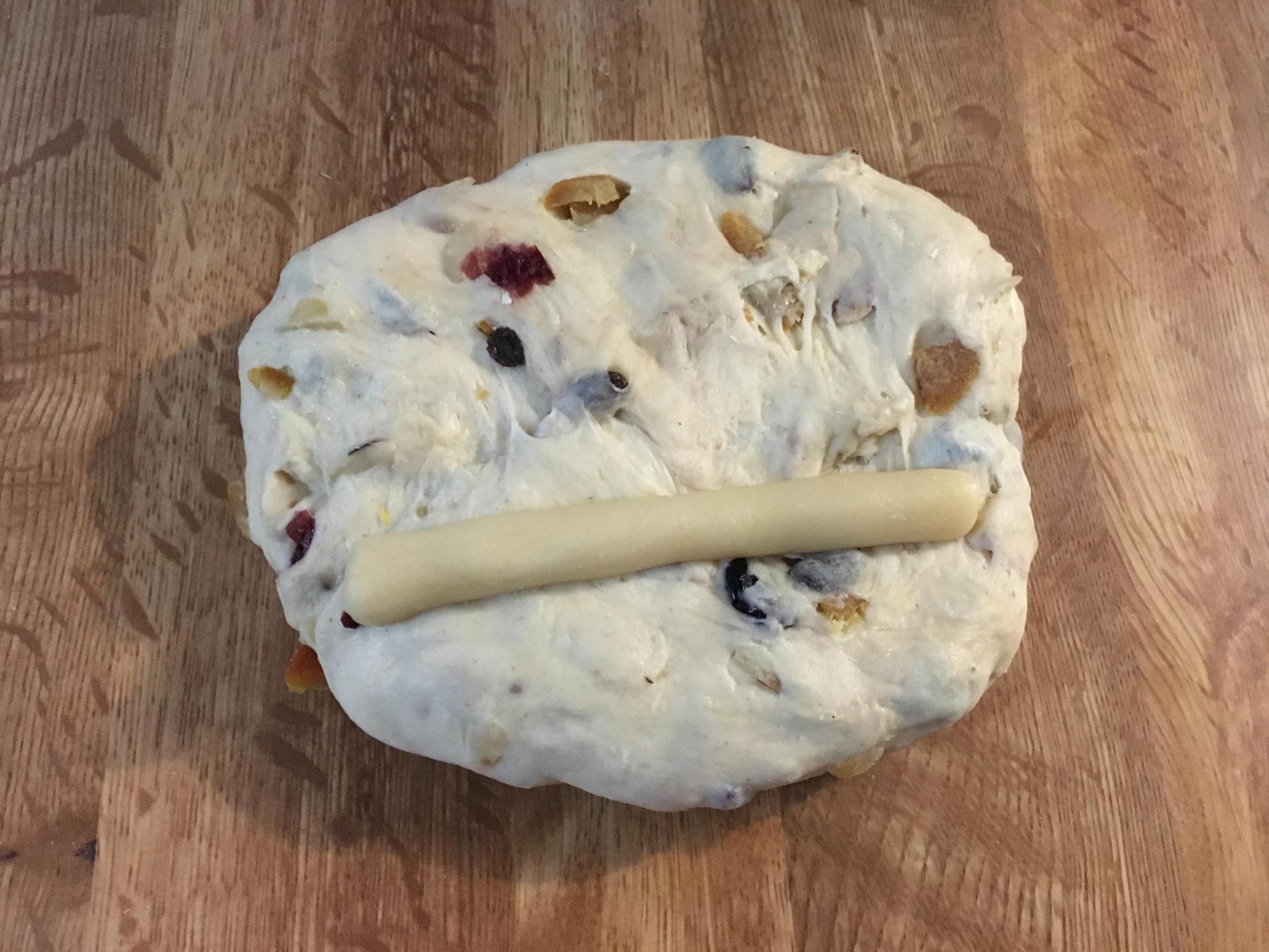 9. Allow the dough to proof for 1-1.5 hours. It will not double in size, but it will expand and feel airier. If you rolled logs, shape into a gentle crescent before sliding into the hot oven with no steam. Bake for 40-50 minutes, until the crust is a rich golden color. 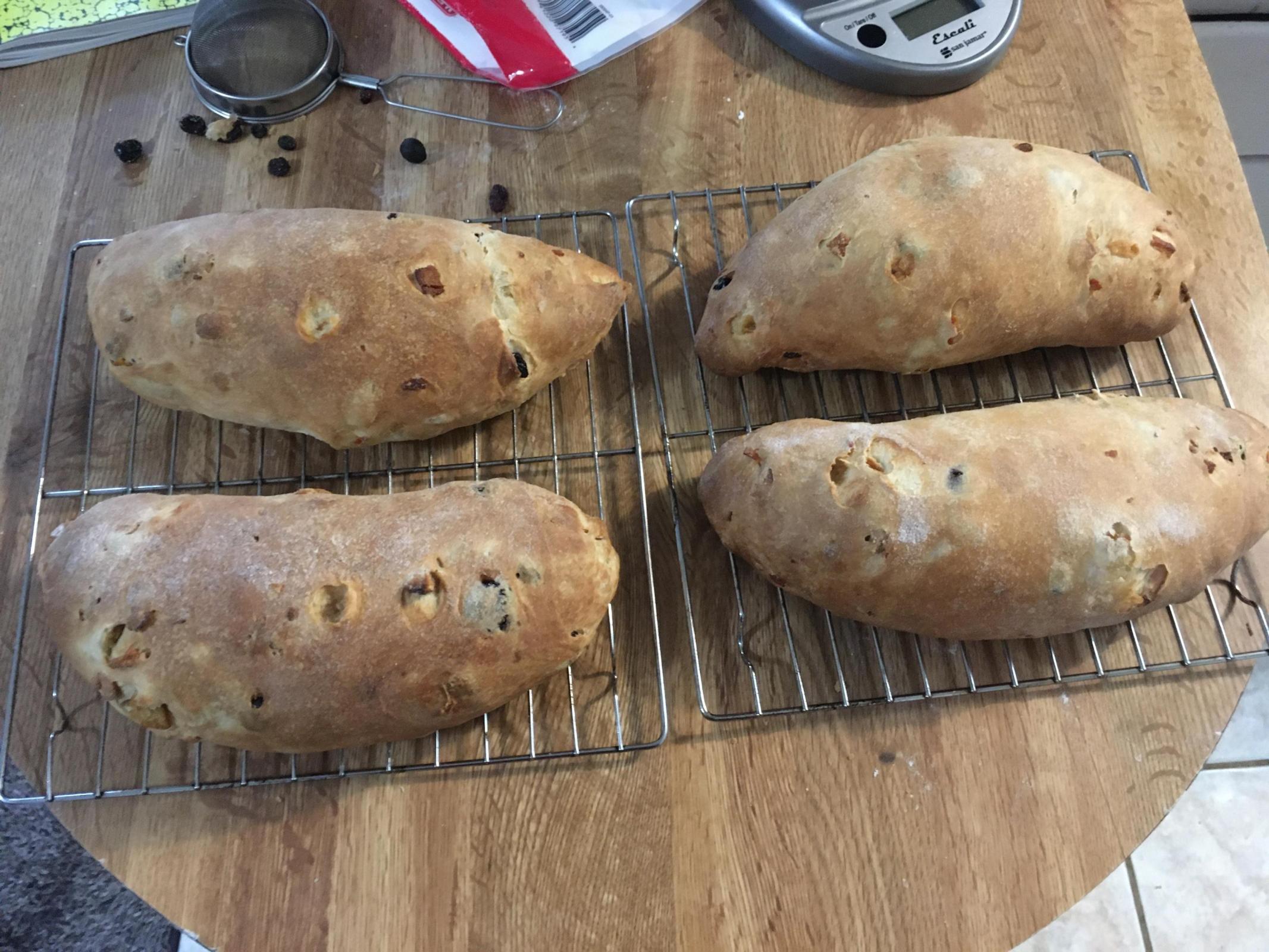 10. Remove and cool for 15 minutes before dabbing with butter, allowing it to melt over the surface of the loaf. Sprinkle on powdered sugar according to taste (I think more is merrier!). Then allow to cool before serving. Stollen is best served warm and spread with butter, so if it has cooled to room temperature, reheat for 10 minutes at 325 °F before slicing and serving.

I tried a dairy-free version to fine effect as well, by substituting fresh almond milk for the milk, and vegan butter for the butter. What a treat to eat rich, vegan stollen!

Enjoy the bake if you give it a try, and happy holidays to you and yours.