Cinnamon Rolls with Vanilla Bean Cream Cheese Frosting are made using the sweet Texas Roadhouse Roll dough brushed with butter, and sprinkled with a cinnamon/sugar mixture. Then they’re rolled, sliced and baked. Once they’re removed from the oven, I spread the tops with a cream cheese frosting flavored by a vanilla bean. They’re the perfect menu addition to any weekend breakfast or brunch or to just enjoy with a cup of coffee!

Some mornings you just need some yummy gooey goodness to get you moving. Am I right?

You KNOW what I’m talking about.
You’ve got that awesome cup of coffee in your favorite mug and made just the way you like it – black, extra light, or sweetened with my easy French vanilla creamer.

And to complete that picture of you snuggled on the couch under a blanket with either your phone or laptop or most often in my case, both, you have a large, warm homemade cinnamon roll smothered with this awesome frosting on a plate next to you.
Can you smell it?
I sure can!

SAVE THESE CINNAMON ROLL RECIPE TO YOUR FAVORITE PINTEREST BOARD! 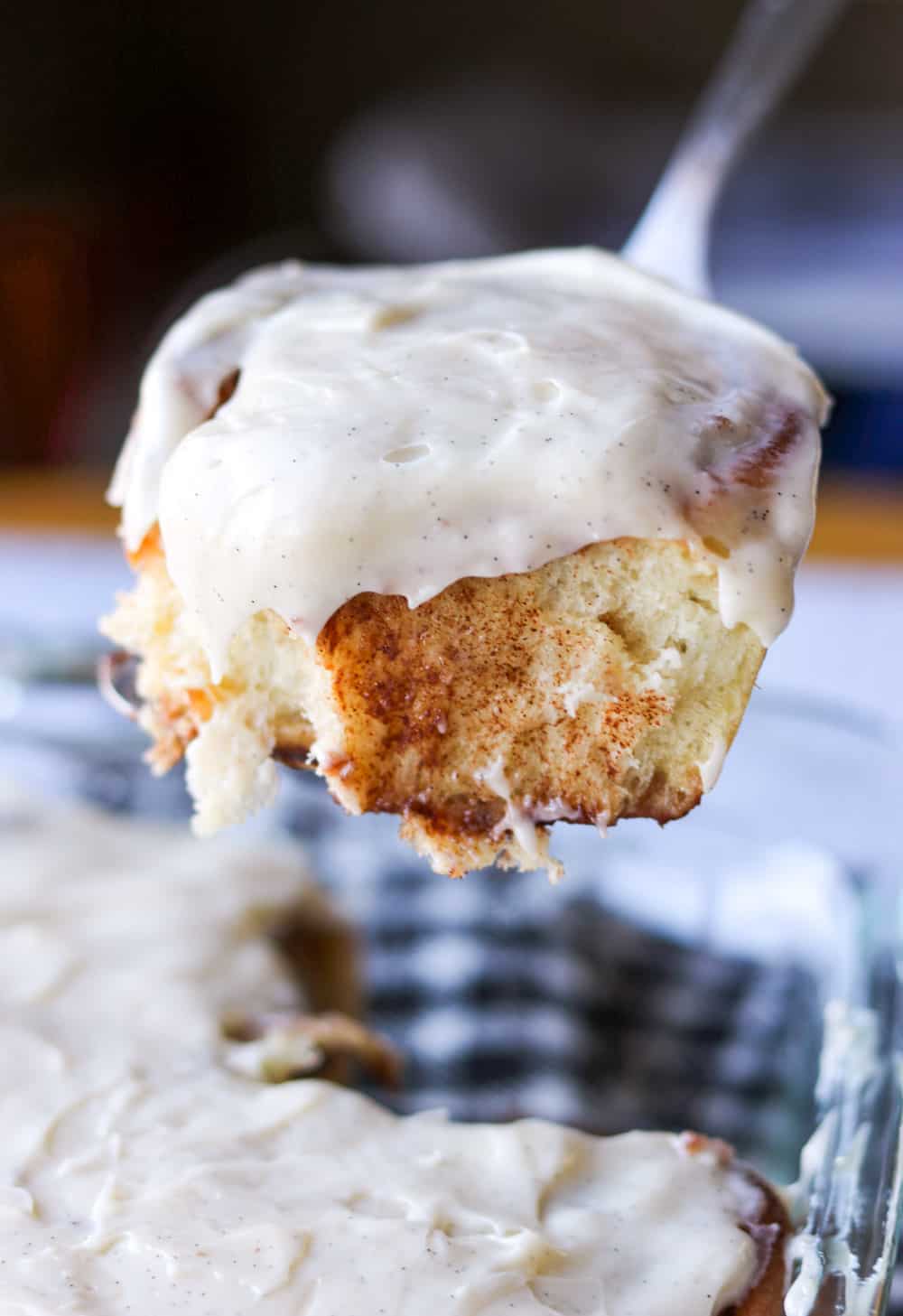 The reason why they were that good is this…it’s the dough of all doughs for any cinnamon rolls I make from now on.
I found the secret.
I’m not gonna lie – they take some time to rise.
Plus, the recipe is wordy and looks more involved than it actually is, but they’ll be well worth it. I promise.

Surprisingly, it really is an easy cinnamon roll recipe.
You’re just taking this dough, letting it rise, spreading it with buttah, sprinkling with cinnamon/sugar, rolling it up, cutting it into slices, spreading with more buttah, sprinkling with more cinnamon/sugar, letting it rise some more, baking and slathering that icing on.

No problem!
If I can do it, so can you. Seriously. 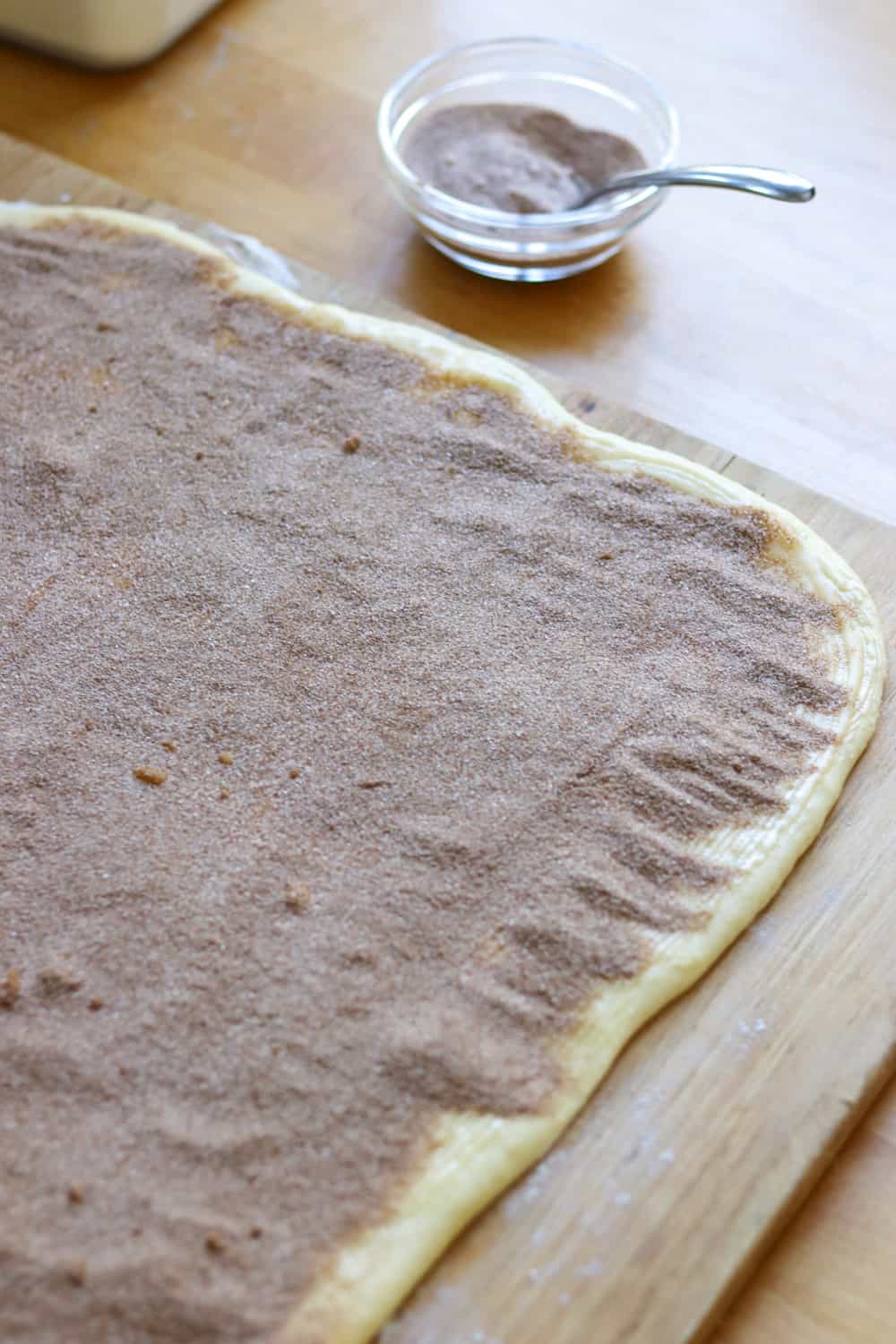 Here are some tips and tricks to make these yeast cinnamon rolls from scratch the best EVAH!

I know there are plenty of other recipes where you can make overnight cinnamon rolls, one hour cinnamon rolls, and yes, you can even save time by going to the store to pick up a canister of Pillsbury cinnamon rolls, BUT…
I really think you’ll be pleased with how soft, and incredibly delicious these are even if you do have to wait a bit before enjoying them.
Remember, good things come to those who wait!

What is the best way to cut the cinnamon roll dough?

I’ve found that the best way to cut the dough into individual rolls is to slice it with a long piece of clean, unflavored waxed dental floss.

Using the dental floss will give you rounder rolls.
They won’t have the force of the knife pressing down to flatten or compress them. 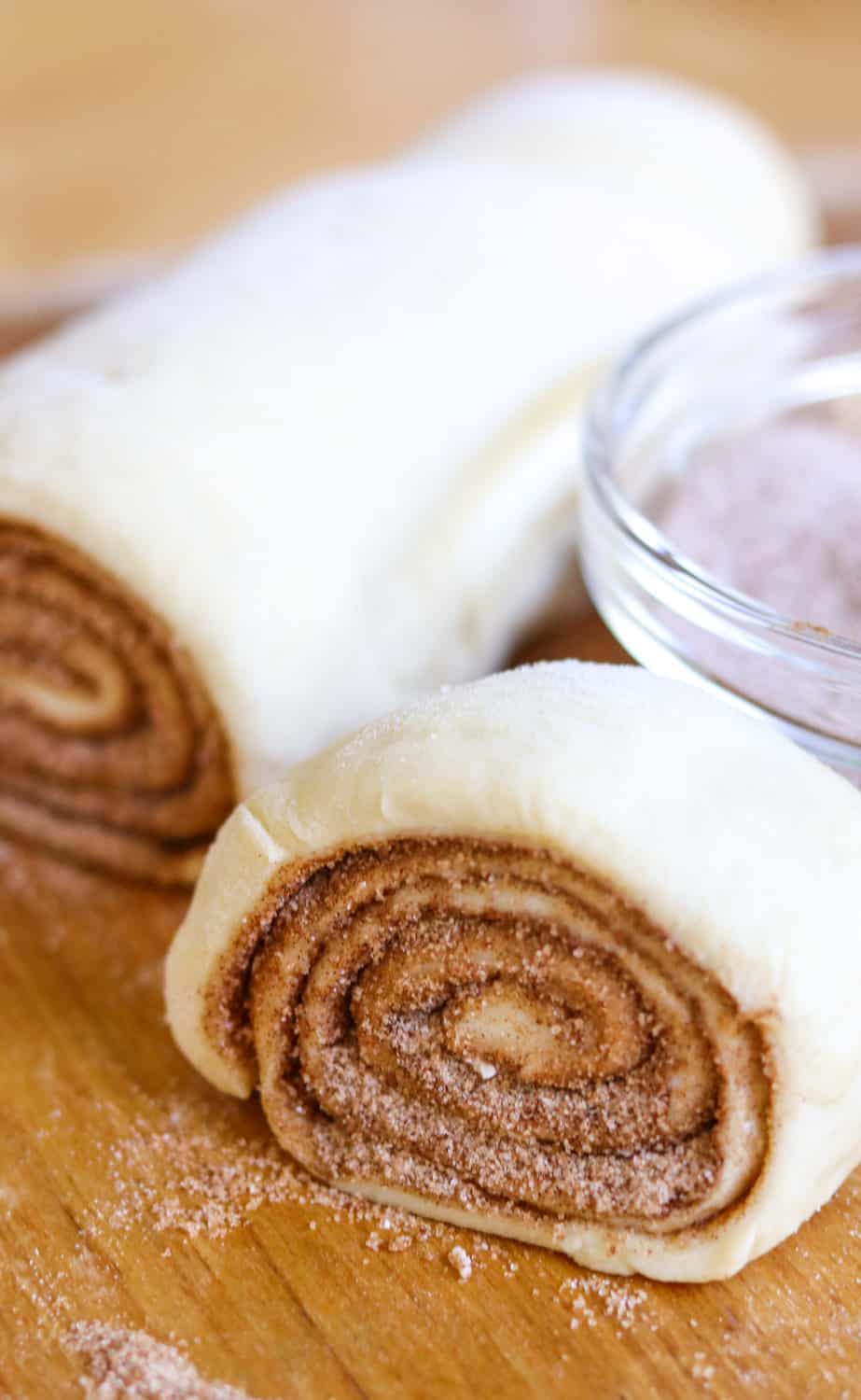 And another secret is the vanilla bean seeds in the frosting.
I didn’t just use vanilla extract, I “kicked it up a notch”, taking those yummy little black bits out of that long brown piece of goodness. 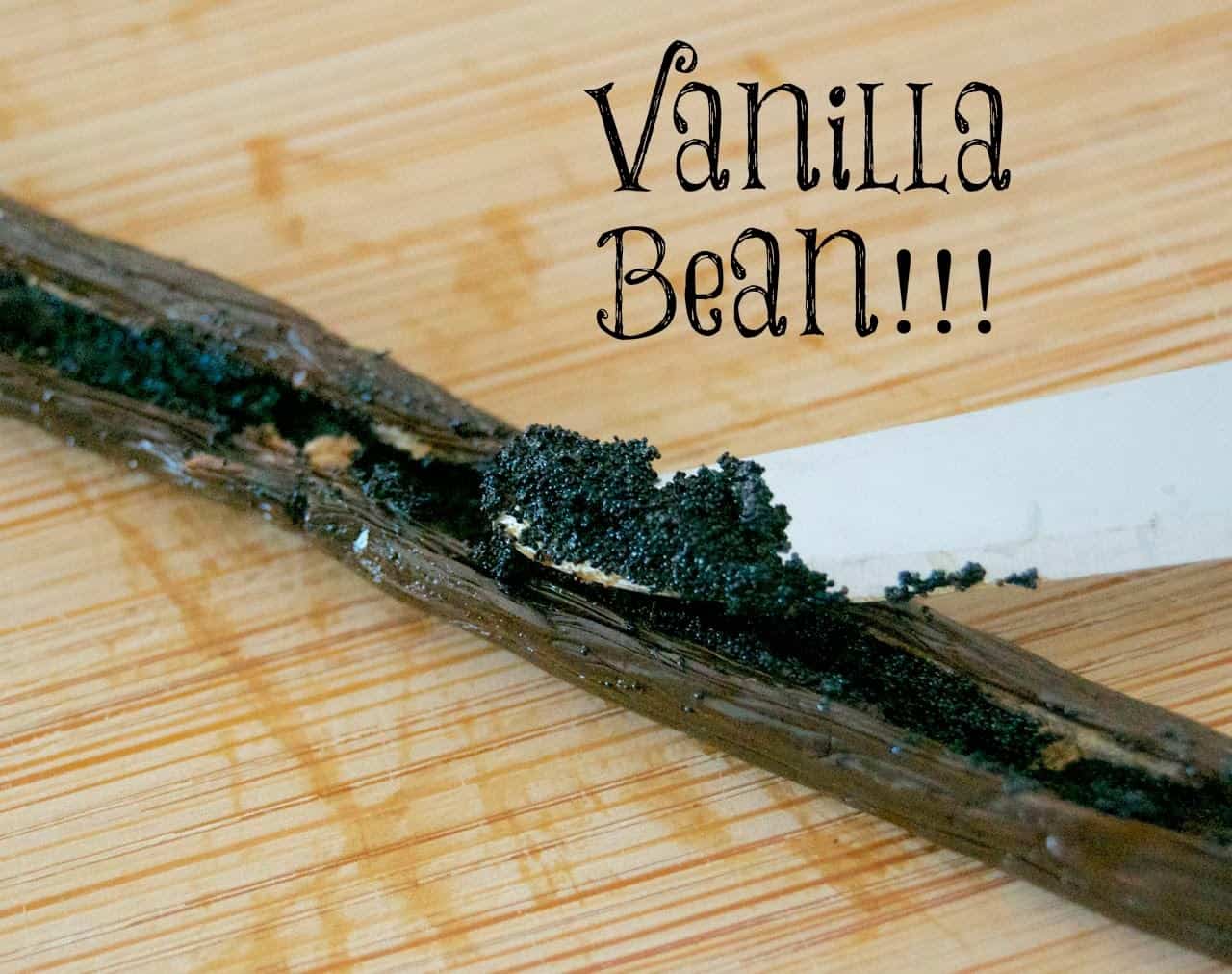 Looks like caviar, kind of sort of.
This stuff is the black caviar of baking.
At least, that’s what I’m calling it.
Add it to the frosting, you won’t be sorry.
This frosting recipe was adapted from Simply Savvy Recipes.

How much vanilla extract do I use in place of a vanilla bean?

I understand that vanilla beans are expensive and might just not be in your budget.
Not a problem!
I’d love more for you to make these cinnamon rolls using all vanilla extract than skipping them altogether because you don’t have a vanilla bean!

So, in place of the vanilla bean, add one teaspoon of pure vanilla extract to the 1/4 teaspoon called for, making the total amount 1 ¼ teaspoons vanilla. 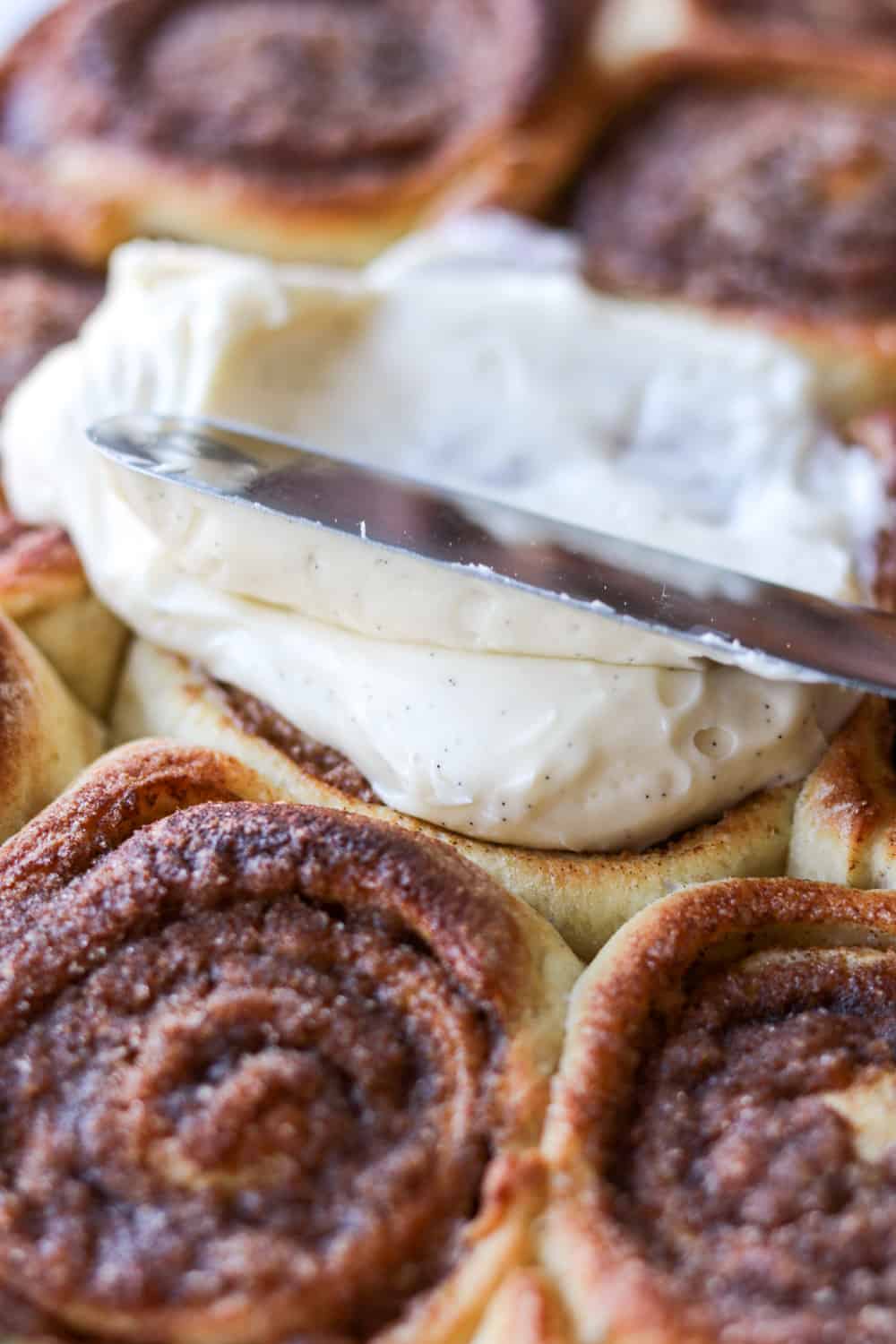 These homemade cinnamon rolls will be delicious paired with a coffee sweetened with this peppermint white chocolate creamer, or a touch of dulce de leche creamer.
I can also see myself enjoying it with a cookie butter white chocolate mocha, or an almond candy bar frozen coffee.

Breakfast will be better with this recipe on the menu.
It will be a delicious meal when you serve my huevos rancheros, crepes, lemon blueberry cottage cheese pancakes, or this easy peaches and cream French toast bake.

The first meal of the day is certainly a favorite around here!
Raspberry cream cheese scones, cinnamon sour cream coffee cake, and this pear cream cheese danish are just some of the recipes I make for my family and have received rave reviews from others.

And of course, bacon!
Every weekend there needs to be some bacon on the table and this is THE best way to make it.
I don’t make it any other way because it’s so gosh darn easy, AND the clean-up is a breeze! 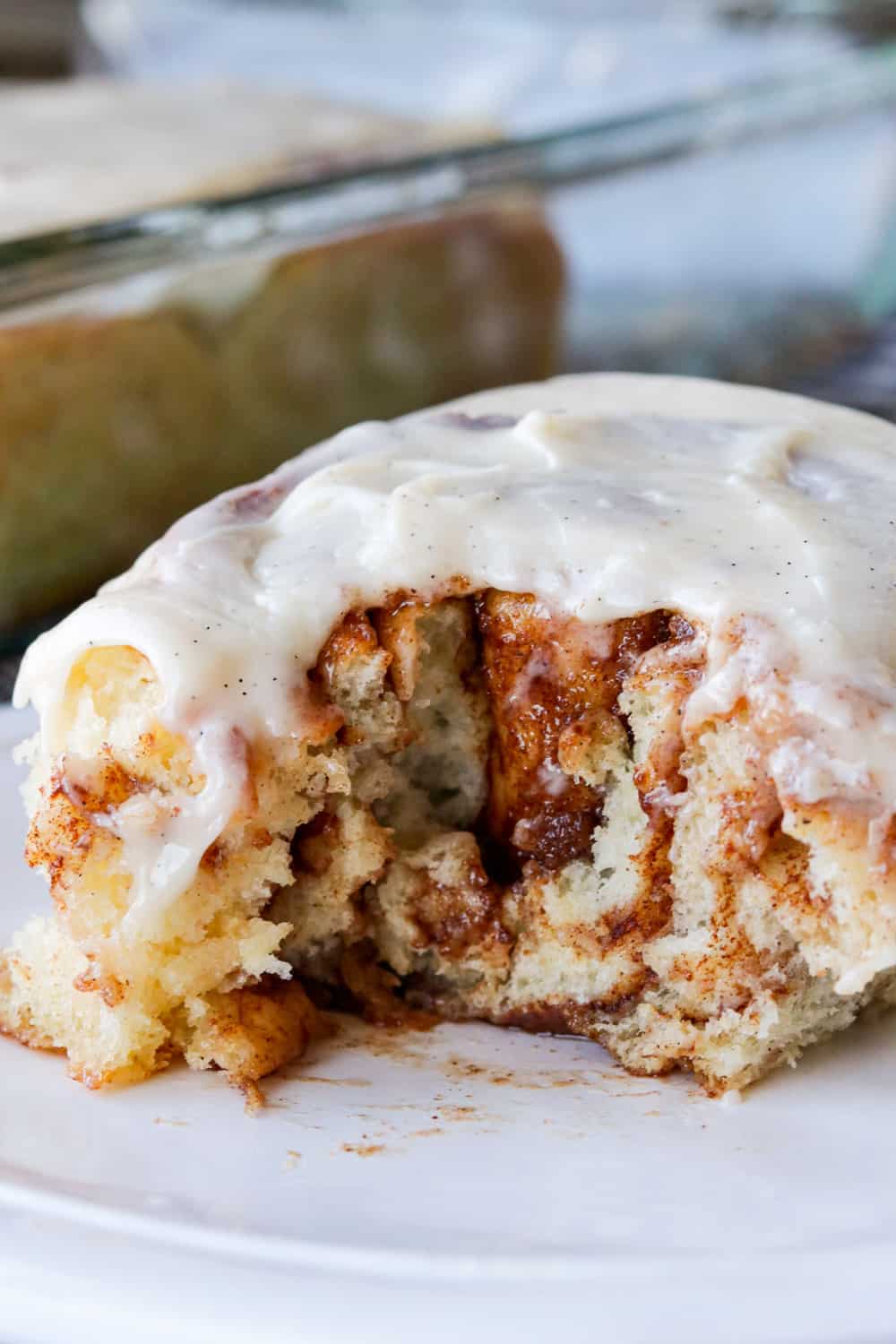 SIGN UP FOR THE WEEKLY
365 DAYS OF BAKING & MORE
NEWSLETTER BELOW!

If you’ve made any of our recipes, we’d love to see them and possibly give you a shout out on our social media!
Share your finished creations on Instagram, and be sure to tag @365daysofbaking so we can find you. 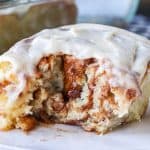 I’ve found it super helpful to use a piece of unflavored dental floss when slicing the dough into individual rolls. It helps them keep their shape as opposed to cutting the dough with a knife which can sometimes flatten them. 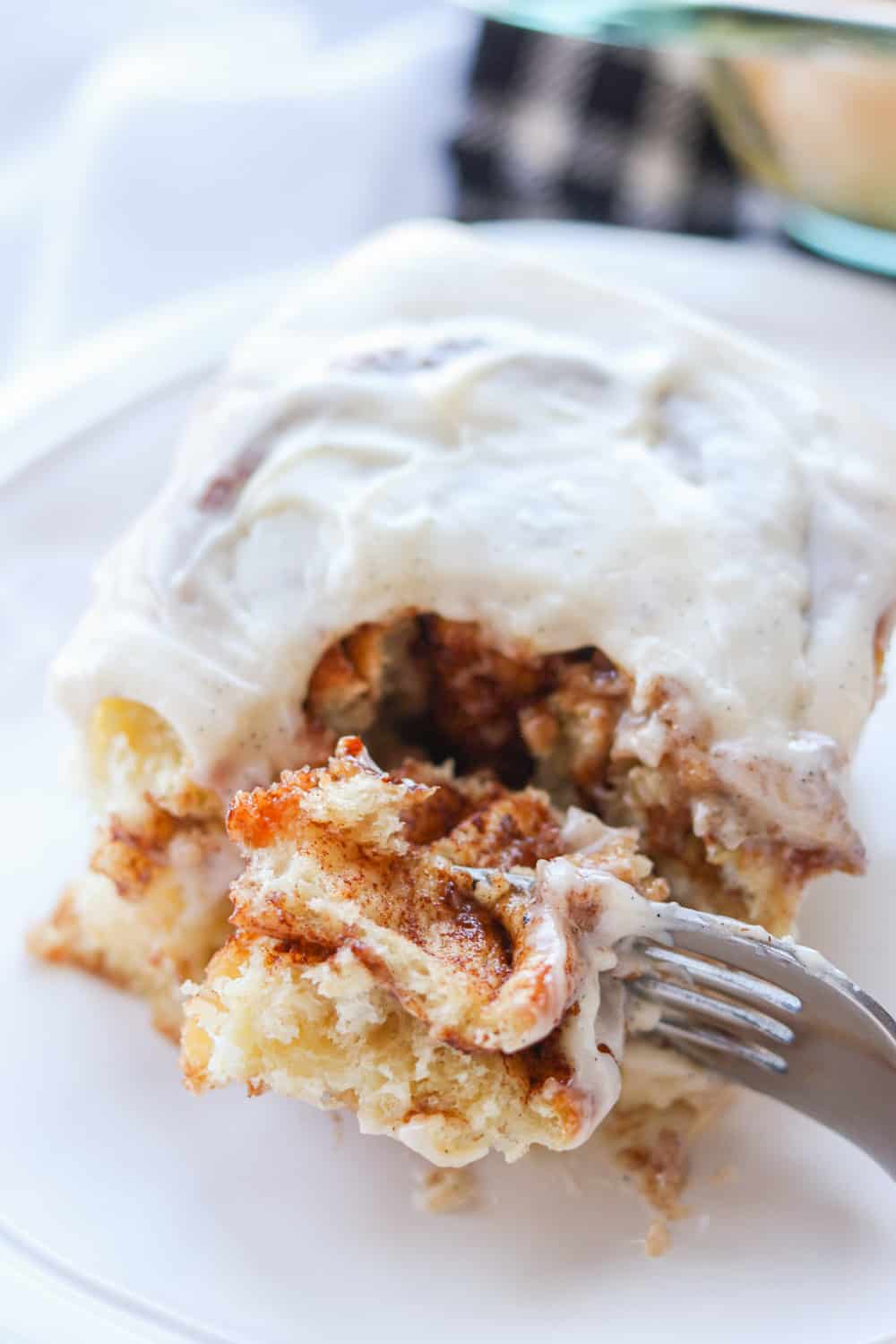 Your family will thank you and beg for more.

I rate everything I make on a scale of 1-4 with 4 being the best and these Cinnamon Rolls with Vanilla Bean Cream Cheese Frosting earned…yesiree, Bob,  4 rolling pins!!
I really think that your family will love them as much as mine does.