These vegan chocolate cupcakes are rich, decadent, and loaded with chocolaty flavor. Easy to make and perfect for everything from special occasions to just treating yourself!

There’s just something about cupcakes, am I right? I mean, I love a big fat slice of vegan chocolate cake, but cupcakes feel kind of special. Is it the cute little packaging? The vegan chocolate frosting that gets piled on top? I don’t know, but cake in cupcake form is my favorite.

How to Make Vegan Chocolate Cupcakes

The following is a detailed photo tutorial on how to make vegan chocolate cupcakes. Scroll down if you’d prefer to skip right to the recipe! 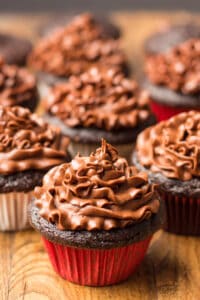 Nutrition information does not include frosting.