About a month ago, I reviewed Daniel Leader’s Living Bread.  In passing, I mentioned that I had baked one bread from the book and would post about it separately.  Well, finally, here is the promised post.

The formula is fairly straightforward: a liquid levain (40%), Type 65 flour (90%), whole rye flour (9%), water (77%), salt (2.5%), dry instant yeast (0.1%).  Note that I’m following Leader’s baker’s percentages; the T65 flour is really 91%.  He does give a separate table for the liquid levain build; all of the levain goes into the final dough with no carryover or discard.  While the dough has a nominal hydration of 77%, based on the water in the final dough, the actual hydration is closer to 81% when the levain’s water and flour contributions are included.

Since I didn’t have T65 flour on hand, I did a little noodling with Pearson’s Square and came up with a blend of whole wheat flour and bread flour in the proportions (if memory serves) of 65% whole wheat and 35% bread flour.  This looked as though it would have an ash and protein content that is in line with T65 flour, even if it isn’t the real deal.

Since this was my first time making this particular bread, I followed the quantities and directions scrupulously for the levain, the autolyse, and the final dough; up to the point of the overnight cold retard.  The flours that I used would have benefited from slightly lower hydration.  The dough was quite sticky and grabby, preferring to latch onto any available surface instead of releasing cleanly.  That was after 15 minutes of machine mixing and two rounds of stretch and folds.

Since the loaner refrigerator that we have from our appliance dealer (it’s only been a year since we placed the order for the fridge and the freezer, which doesn’t seem to concern anyone at Electrolux) is rather small, I elected to skip the overnight cold retard and bake the bread after it fermented at room temperature.

The second departure from the recipe came during shaping.  The text talks about shaping boules.  The accompanying photograph shows batards.  I chose batards, which precipitated the third and final deviation from the recipe: I baked them on a stone in the oven, with steam, rather than in a Dutch oven.  But I’m getting ahead of myself.

Preshaping and shaping this very sticky dough was a challenge.  Although I managed, it wasn’t my best effort.  The shaped loaves (I made the dough into two loaves, instead of one very large loaf) went into bannetons for their final proof.  It turned out that the dough wasn’t quite finished with me.  Slashing was ugly, with the dough grabbing the razor blade.  And, even though I transferred the loaves to a sheet of parchment on the peel, they still managed to latch onto the peel itself instead of sliding off cleanly.  That’s why they look a little beat up in the photos.

The lead photo shows both loaves after baking.  The following photo shows a close-up of one of the loaves.  The crust color is excellent and, suprisingly, there are some blisters in the crust even without the cold retard step.  The loaves exhibited quite a bit of oven spring, which was a real relief considering how much they were degassed while trying to release them from the peel.  Cleaner scores would have allowed for even better expansion with less tearing. 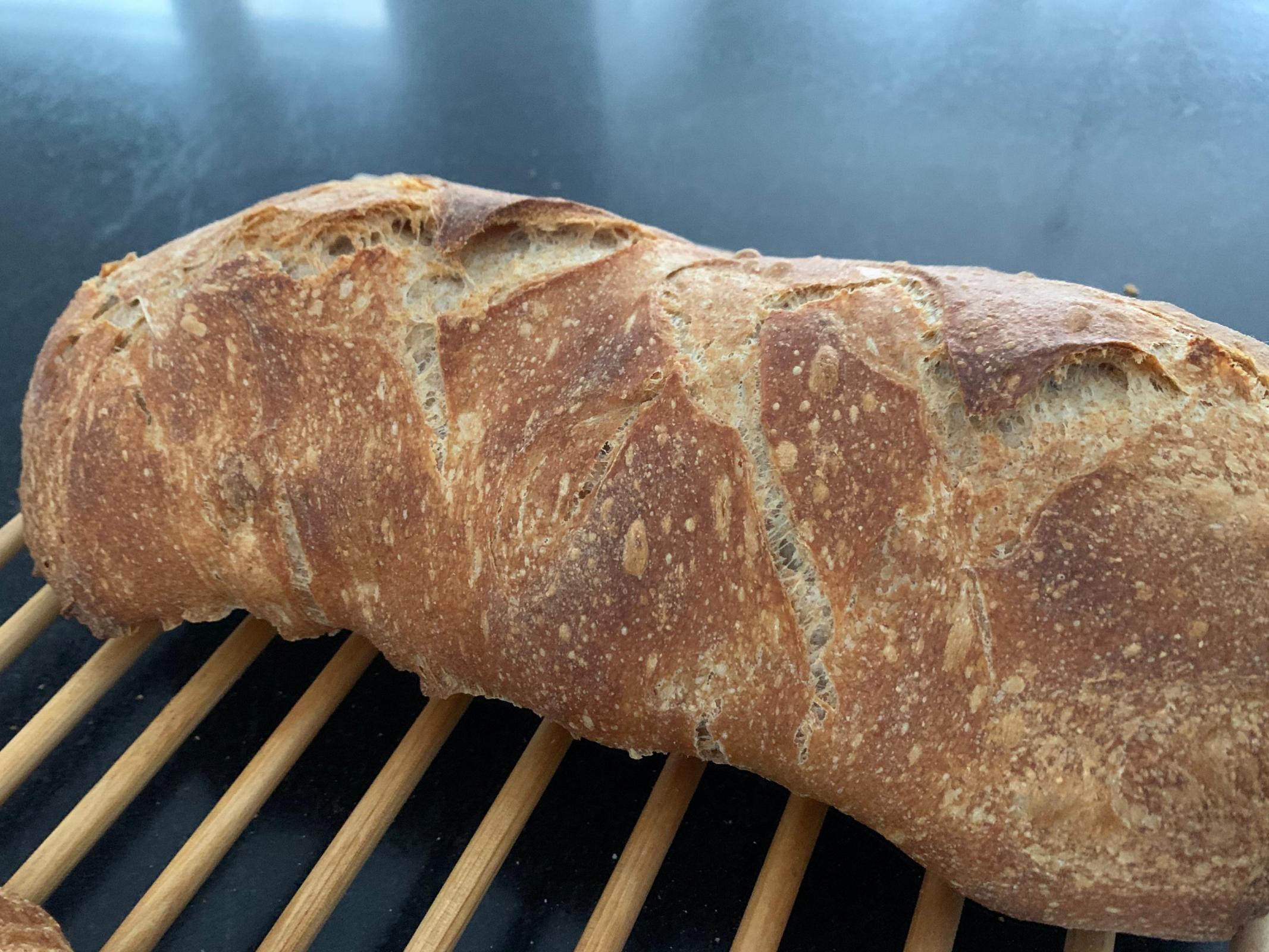 The crumb, shown in the following photo, also attests to the miracle of oven spring.  I really thought that the wrestling match to get the bread into the oven would thoroughly deflate it.  The crust was thin and crisp. 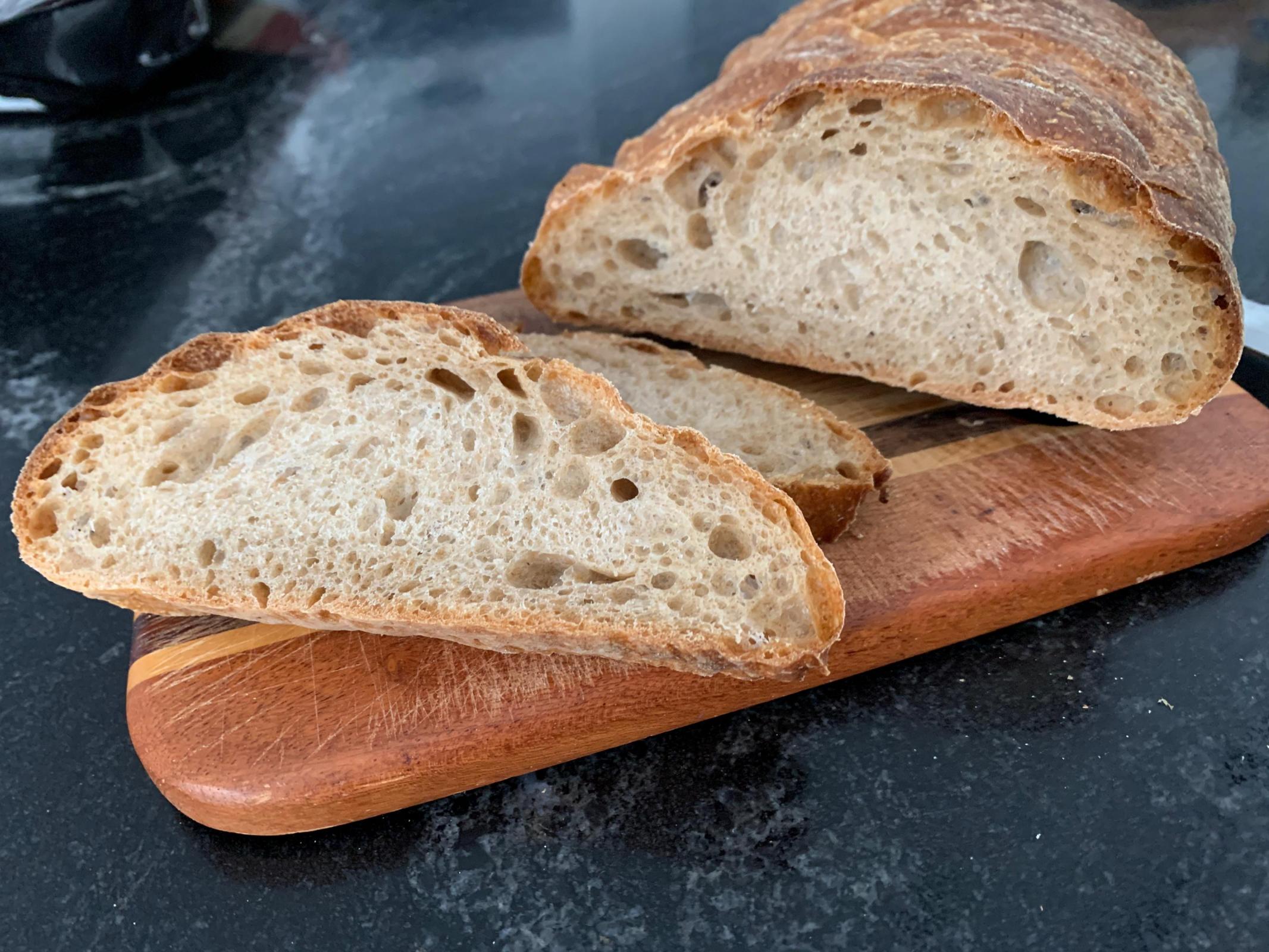 So, how did it taste?  Pleasant, with a mild tang, but nothing to write home about.  I suspect that the cold retard would allow more flavor development.  One could also do away with the yeast kicker to slow fermentation further.  The texture was firm with a respectable chew but not tough.  Not surprisingly the crumb was moist, although it didn’t go so far as to be custardy; which was fine by me.

I’m not sure that I will make this specific bread again.  It doesn’t have any glaring deficiencies but neither does it have much of a “Wow!” factor to elevate it above other pains au levian.  I will give it points for tenacity, which is most likely a product of the extended mixing time and the relatively high-protein flours used.  Most breads would have come out of the oven as frisbees after being subjected to the struggles I had with getting it off the peel.  Then again, a dough with a lower hydration wouldn’t have been nearly as sticky.