Incidentally there have been discussions here recently about using “weak” or unfed starter from the fridge, and I just baked some bread like that yesterday.

Ran out of bread, and my plan for a specific bake yesterday was not meant to be (starter was not quite there yet). Didn’t even have much of my normal refrigerated rye starter that I would use in a bread without issues. But I had relatively recent discard from the last week or two, a mix of whole rye 100% hydration and white 50% hydration stiff starter. I took all discard I had and some of the relatively fresh starter, mixed with some bread and whole wheat flour, salt, and water. I was roughly weighing ingredients, but I didn’t know the exact hydration of the discard, and there was quite a lot of it, so I had to adjust the hydration by adding extra flour after the dough turned out to be way more liquidy than I expected from my rough calculation.

Here is the approximate formula, take the numbers with a grain of salt: https://fgbc.dk/1ab1

At first it appeared that everything was going well, I did some stretch&folds and slap&folds, it seemed to develop some strength. Then I left it to ferment for a few hours with occasional stretch&folds. However in the end the dough was weak and sticky, as if overfermented – although there were barely any signs of fermentation visible. I think the discard brought too much acidity and the gluten  never formed properly, or got degraded very quickly. So I just dumped the dough into two small tins (could have put in one, but I was worried it might decide to grow), sprinkled sesame seeds on top and left in the fridge overnight. Didn’t notice much growth by morning, but when baked the bread had a nice oven spring, and generally looked good! 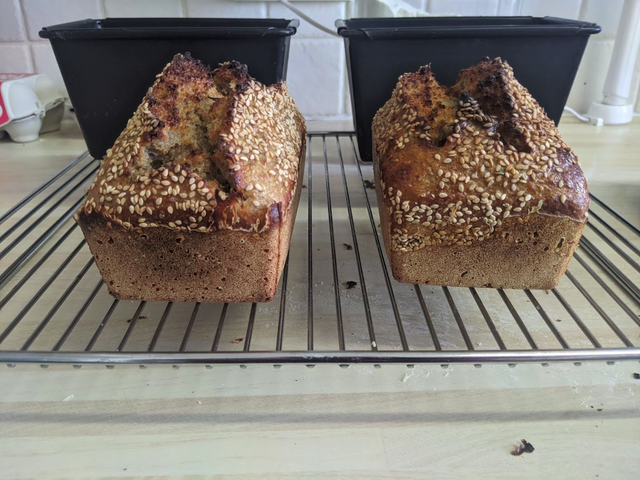 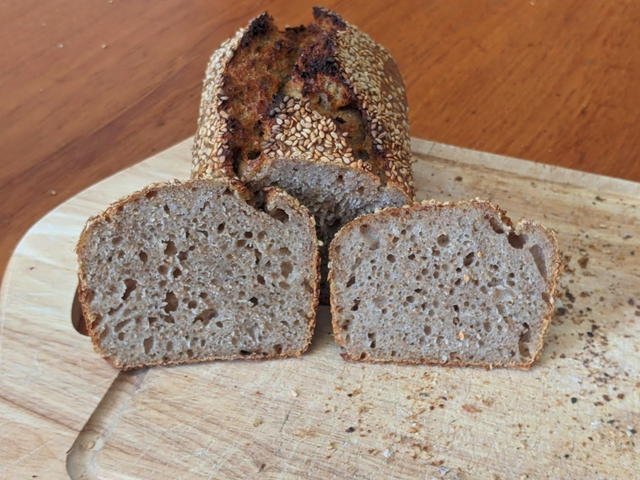 It is on the sour side of my typical bread, the crumb is a little moist, but soft. On the picture it looks a little better than it is for most of the loaf, for some reason it’s more open close to the end, and a little more closed and dense inside – but it’s still actually good throughout. The crumb tears just a little when cutting, like into shreds… A bit like rye bread with not perfect crumb does. But it’s a very minor issue, which doesn’t really affect the eating experience.

Just wanted to share this as an example of baking with unfed starter, it can cause challenges, but bread can also turn out well!