Time to get the rust out of my baguette baking.  It has been more than two months since I last made baguettes and since I’d only started to bake them this past summer, I kind of feel that I need to bake them often enough to not forget how to make them.  The shaping is always the big challenge to do well.  The other challenge is trying a new recipe using some flour I’ve never used before for baguettes.  It is hard to know what to expect for dough handling, in this case the dough was more elastic than I am used to and one baguette in particular didn’t want to elongate, that despite the fact that it had the longest rest time after pre-shaping.

This recipe was posted by Martin Philips of King Arthur baking, Dan Ayo of TFL fame posted about it.  I was interested in trying it.  Having use semolina for baguettes in the past the use of whole Kamut caught my eye.  Having made this once now, I would increase the hydration and also perhaps reduce the slap and folds I did at the onset.  One of the reasons I did slap and folds where I don’t usually for baguettes (not wanting to build too strong gluten) is that I made an error with mixing the fermentolyse.  Instead of starting with water and levain and dissolving the levain in the water.  I started with flour, then levain then water etc and I was concerned that I wouldn’t have the levain mixed thoroughly enough for a consistent fermentation.

I also added diastatic malt 1% as is my usual to help with crust browning.  It also speeds up fermentation giving the microbes more sugars more quickly. 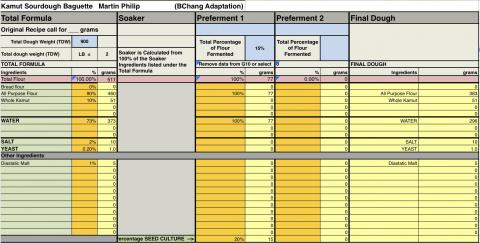 No IDY was used in this bake, IDY is optional.

Fermentolyse – mix 286 g water with all the levain to dissolve the levain then add both flours and diastatic malt.  to combine rest for 40-60 mins

Do folds every 30 mins doing 3 folds

Could do cold retard at this point for next day baking. (Aliquot jar 20% rise)

Divide and pre-shape rest for 15 mins

Use Kamut flour for couche

Transfer to peel on parchment

Score each baguette and transfer to oven bake on steel

The baguettes are baked with steam for 13 mins.  The steam equipment is removed venting the oven of steam.  The oven is left at 480ºF but convection is turned on and the baguettes bake for 10 mins rotating them halfway.  The oven temperature is then dropped to 450ºF and the baguettes rotated again if needed and baked for another 3 mins to achieve a rich colour crust. 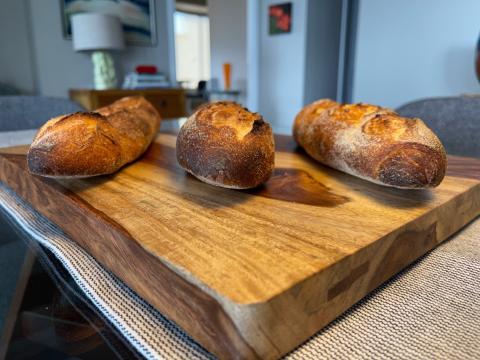 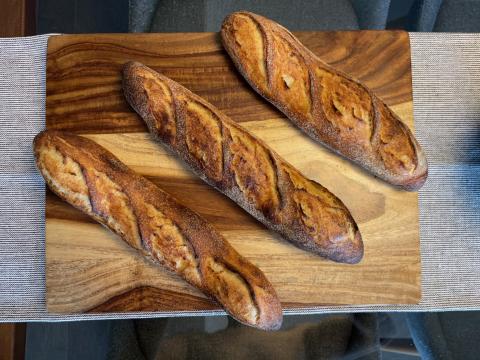 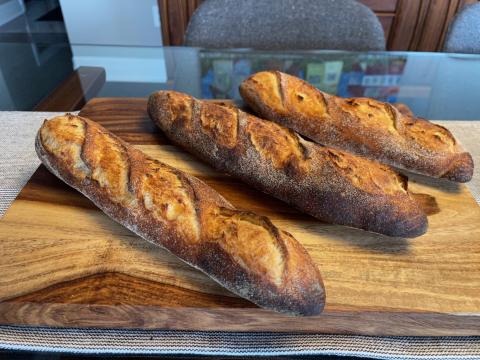