My husband wanted “Carraba’s” bread, so I made some No-Knead Bread based on Jim Lahey’s. This bread is about 90% hydration, I think it’s easier to work with than the lower ones since I can feel when the dough needs to rest better (it’s dramatically different).

Mixed all and let sit in a container for 11 hours at about 74F. Mixture was bubbly and smelled fermented in the morning. Put in the refrigerator for about 1.5 hours. Lightly floured the top and did some stretch and folds in the bowl. Let sit for 30 minutes. Sprinkled a pinch of an Italian seasoning blend, then sprinkled on more flour and did more stretch and folds in the bowl.

Left out for about 30 minutes. Not quite doubled.

Preheated oven for 425F. Stretched the dough out a bit and did some finger poking all over it instead of scoring. Baked for 20 minutes. Took it out and rubbed a butter stick on the top. Put back in for 5 more minutes. Bread temperature read 205F.

Bread was puffed up like a balloon. It was about 1/2” tall before going into the oven. I probably should’ve scored it or let it do it’s final rise longer. But no explosions at least! 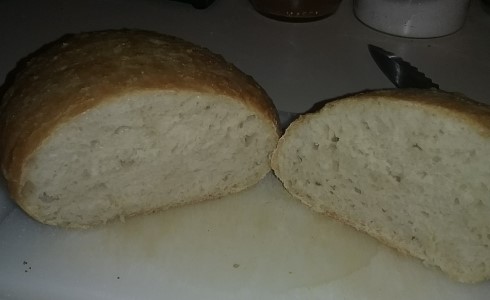 This is for lunch so I’ll report back on how it tastes later.

Update: It tasted pretty good, but too chewy for me. I think that’s the bread flour though, so maybe less bread flour and more all purpose flour. The seasoning was very subtle, two pinches needed if not using an oil with seasoning dipping sauce. To make it really good, it needs some onion-garlic-salt-butter brushed on top after baking. I prefer garlic on top of bread instead of in it.

I’m not big on big holes, this sopped up pasta sauce pretty well. Next time I’ll let it rise fully before putting in and see how big the holes are.