Brownie Pie is a dessert made with an Oreo cookie crust, a layer of chewy brownies, and topped with homemade whipped topping with a drizzle of chocolate syrup. Be sure to try my Death By Chocolate Pie for another decadent treat made with brownies.

It starts with the perfect homemade brownie mix for this brownie pie dessert (which makes a delicious batch of brownies on its own). Then, the brownie batter is baked in a pie pan with an Oreo cookie crust. Finally, the brownies are topped with a layer of homemade whipped topping and drizzled with chocolate syrup. This was a recipe from my Five Ways to Eat Homemade Brownies post. 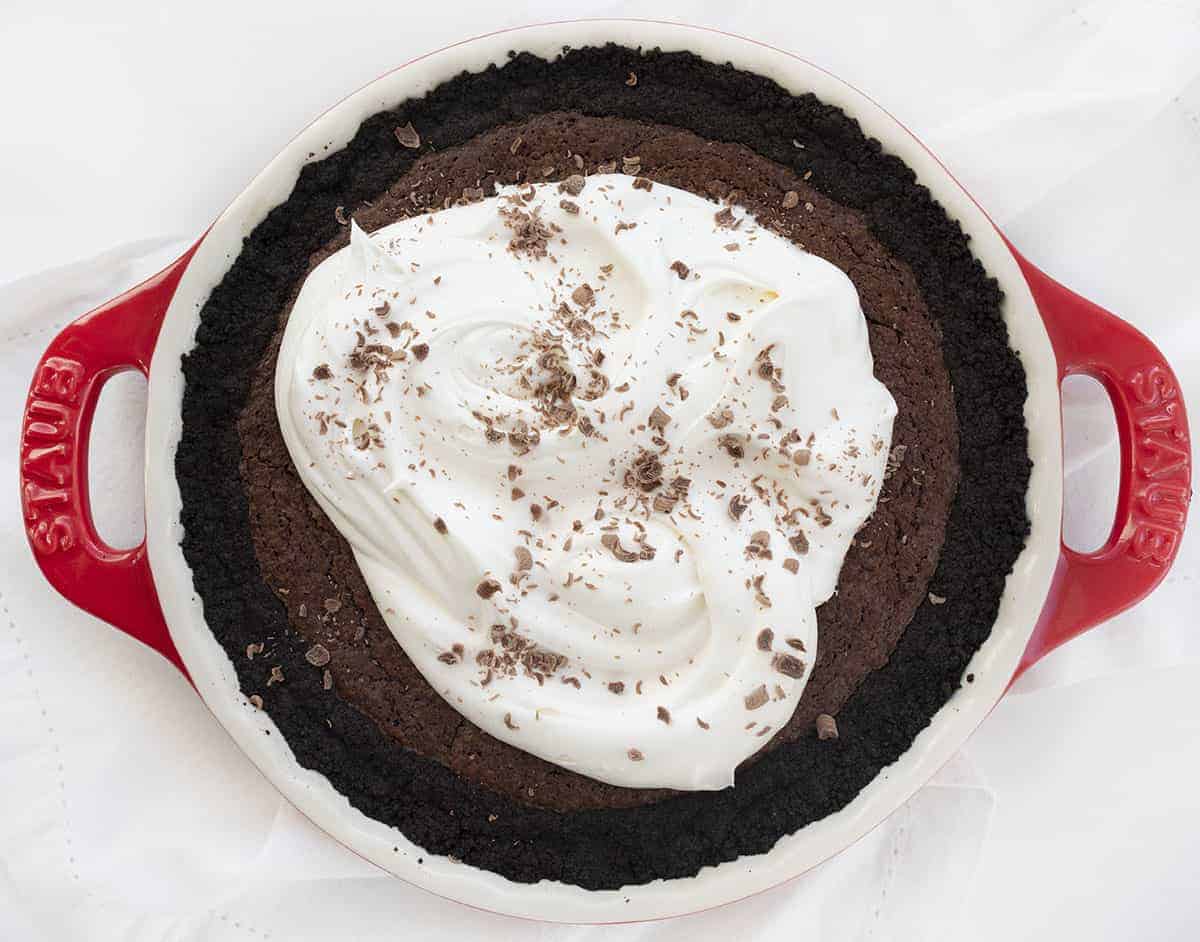 There are three layers in this brownie pie–the Oreo cooking crust, the brownies, and the whipping topping. Plus, you can add more chocolate with some chocolate syrup.

Crust: To make the Oreo cookie crust, you could buy it or crush about 20 of the sandwich cookies with the fillings removed.

Brownies: There are only three wet ingredients (butter, eggs, vanilla) that you add to the dry ingredients, and the brownies can be mixed in one bowl!

Whipped Topping: Sure, you could get by using a storebought cool whip, but it’s easy to make your own homemade whipping cream. Using a lower fat cream or milk will not whip as well when making this; the end result would be a more unstable form. 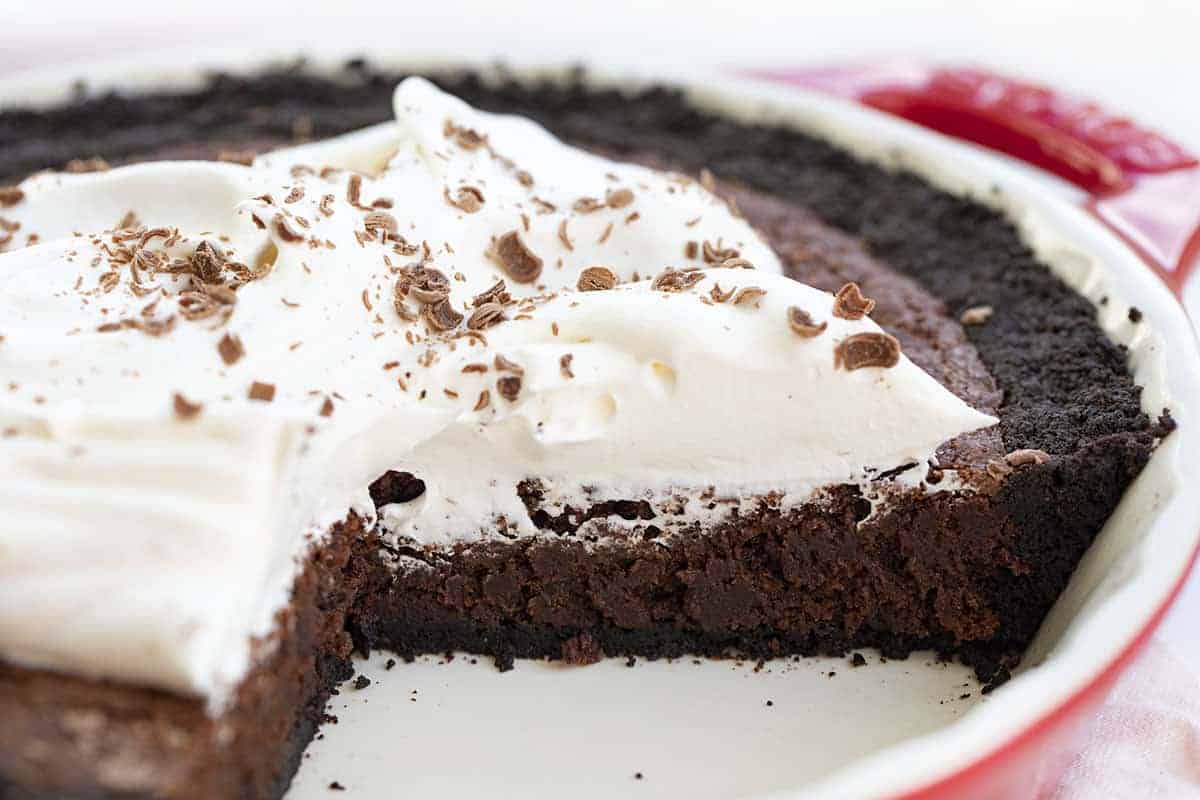 To make the crust for this brownie pie, you need about 20 Oreo cookies. Remove the filling of each cookie before crushing them. If you are crushing your own cookies, add them to a food processor and process until you have a fine crumb. You could also use a rolling pin to roll over the cookies that are in sealed plastic baggies to get them into fine crumbs.

Combine the crushed cookies and melted butter in a medium bowl until the mixture is combined. When mixing together the ingredients (with a fork), make sure every single crumb is coated in butter. The butter acts as the binding agent, so when you see recipes that have piles of crumbs left on the plate, it is usually because they were not coated with butter. 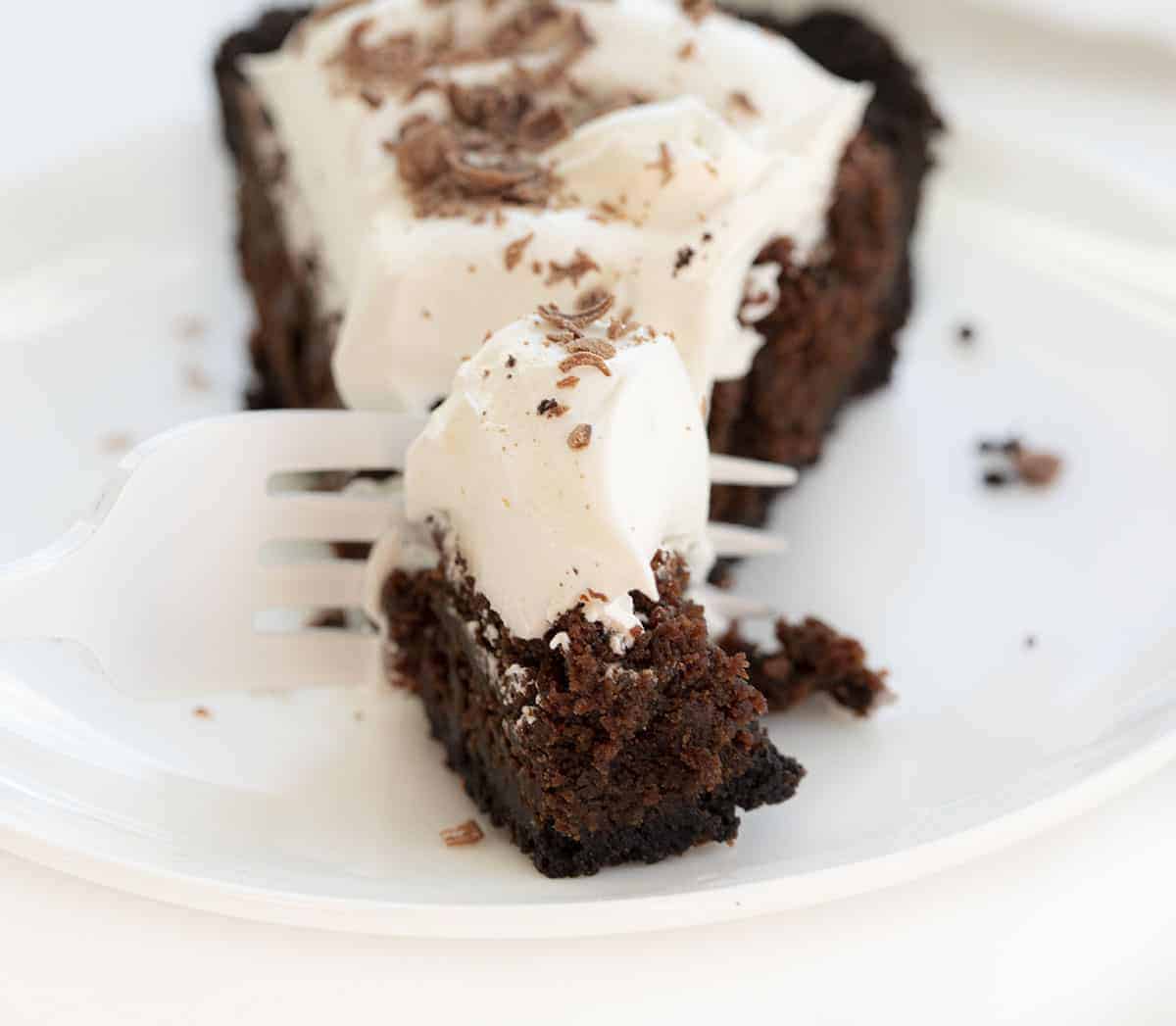 How to Make Brownie Pie

With the crust ready to go, it’s time to get the brownie batter mixed and baked in the crust. To get the batter made, first, melt the butter in the microwave and let it cool slightly. Next, in a medium bowl, whisk together the sugar, cocoa powder, flour, salt, and baking powder.

Then, in a separate large bowl, beat the eggs with the vanilla. Stir in the dry ingredients and pour in the melted butter. Mix the ingredients until just incorporated. Pour the batter over the Oreo crust and bake at 350°F for 35-45 minutes. The brownies are done when an inserted toothpick comes out mostly clean with a few dry crumbs. Allow the pie to cool completely before adding the whipped topping. 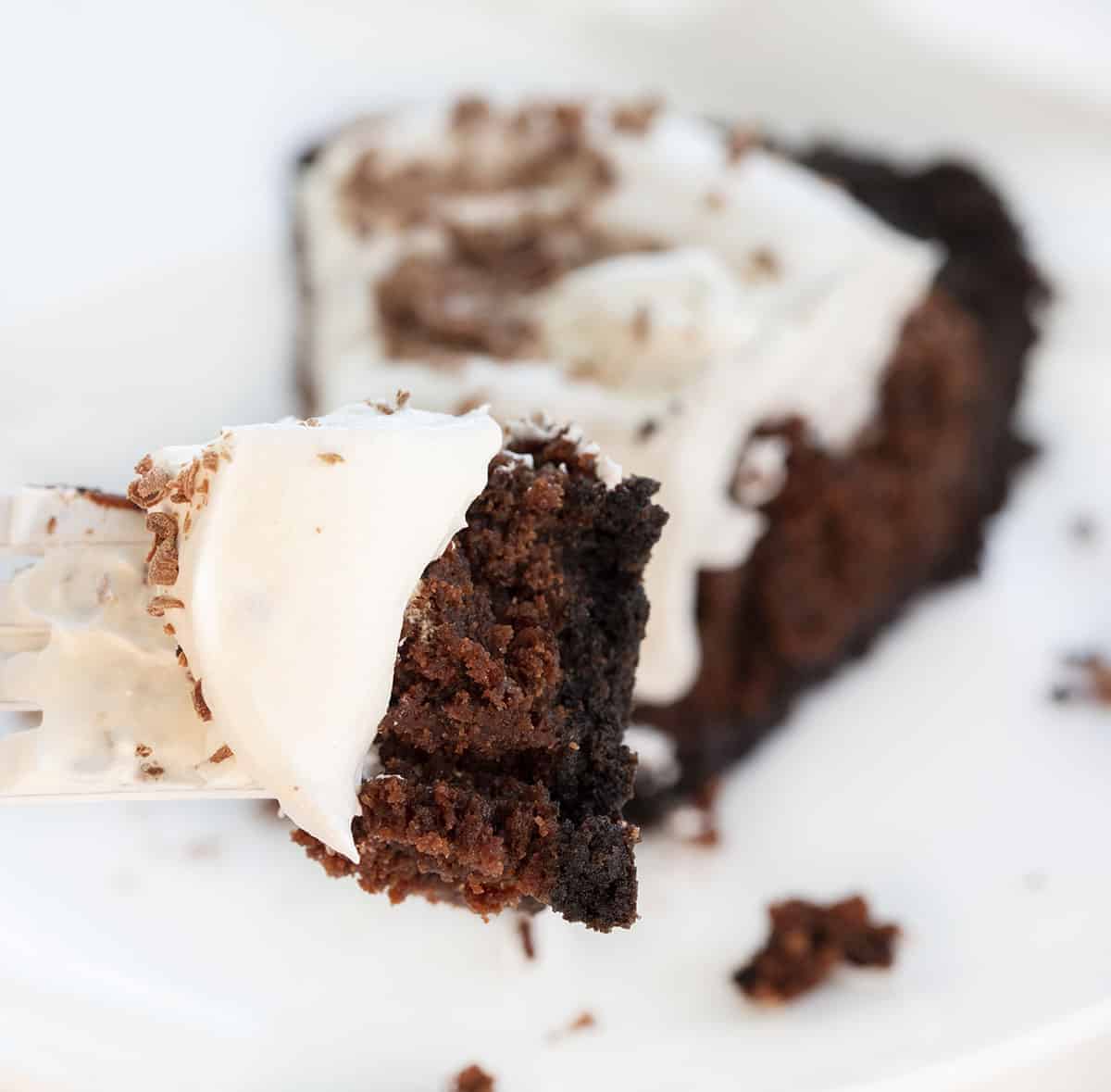 How to Make Homemade Whipped Topping

With just TWO ingredients, you can make your own light and creamy whipped cream topping. Just make sure the heavy whipping cream is cold to get the best results.

Evenly spread the whipped cream over the cooled brownie pie and drizzle chocolate syrup on top for a touch more chocolate flavor. 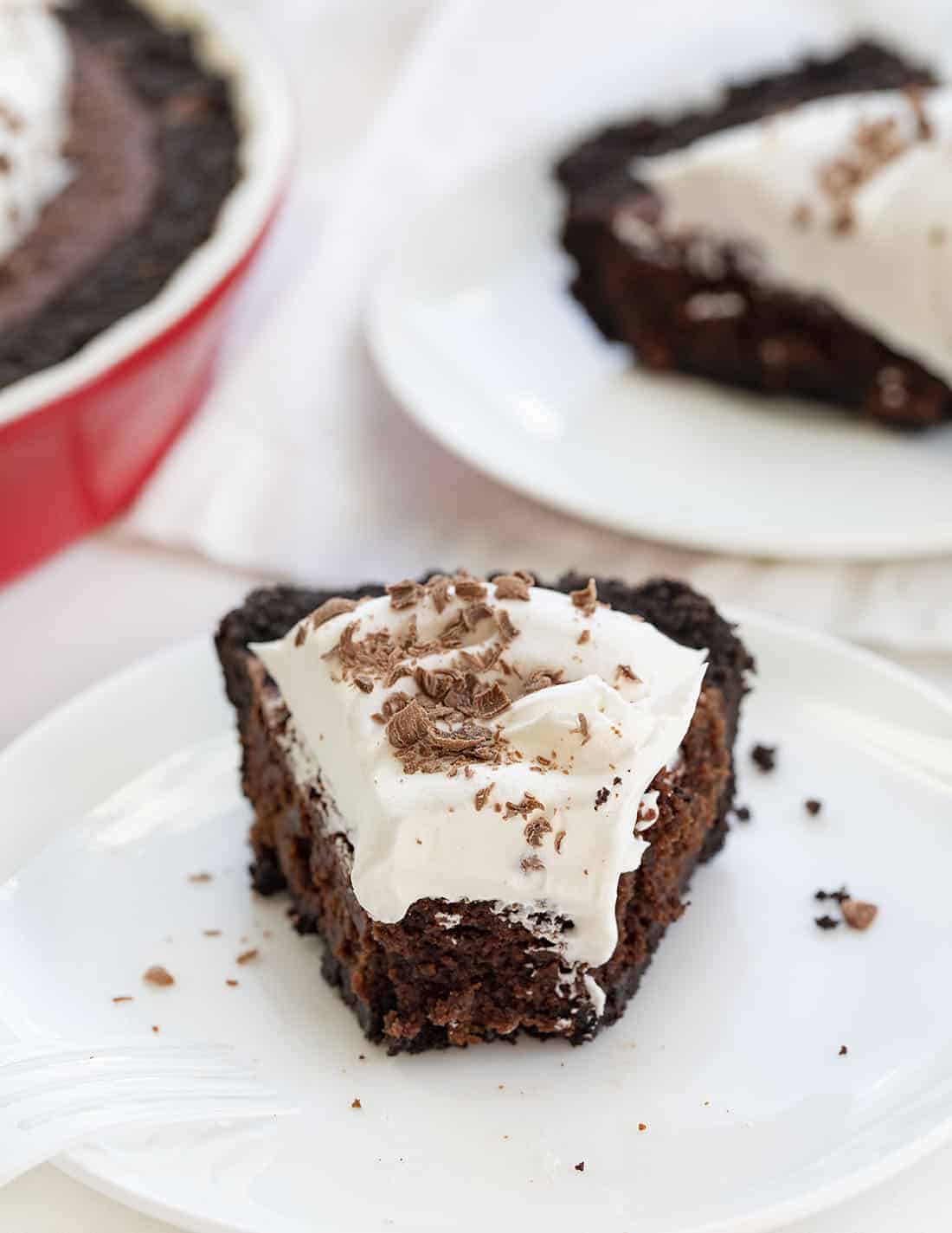 Quick Tip for a FAST Dessert

Want to make a fun dessert with little to no effort? You can replicate this with store-bought oreo crust, brownie mix in a box, cool whip, Hershey’s syrup, and store-bought chocolate curls. Semi-homemade yet still really delish!

Calories: 390kcal
Tried this recipe?Let us know how it was!