I was reading how UK bakers, especially in Scotland and Ireland, used to bake their batch loaves in wooden frames. That’s right – the wooden frame goes INTO the oven! Originally, the bakers didn’t even use a frame – it was just lengths of heavy timber inserted into the oven defining a rectangle with the dough pieces inside the rectangle. Interestingly, these lengths of wood were called “upsets”.

There’s a Scottish baker, Wild Hearth Bakery, who does these batch loaves to perfection. Some regional German breads are also baked the same way.

The idea was so wacky, I just had to try it! Like all new things baking, the journey turned out to be a lot longer than expected….

So I made a simple frame designed for 2 loaves. Oak for 2 sides and maple for the other 2 – just what I had available. I guessed at a size of 5″ tall x 9″ x 6 3/4″ internal. Simple butt joints screwed together:

I made white yeasted bread based on a 4 hour sponge. Baked for 1 hour at 200C Two main problems: the dough stuck badly to the wood (even though oiled well multiple times) and not enough rise. 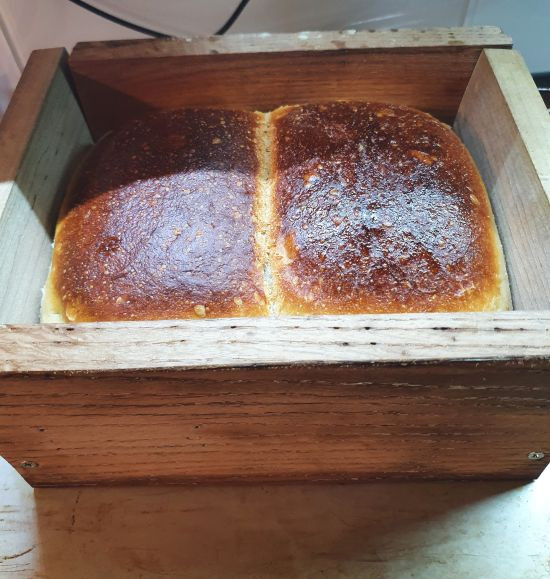 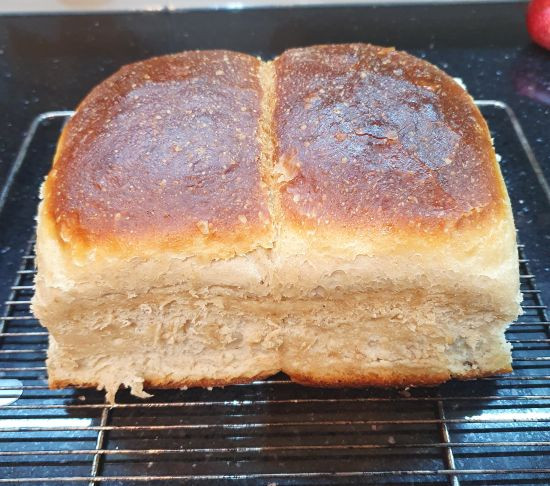 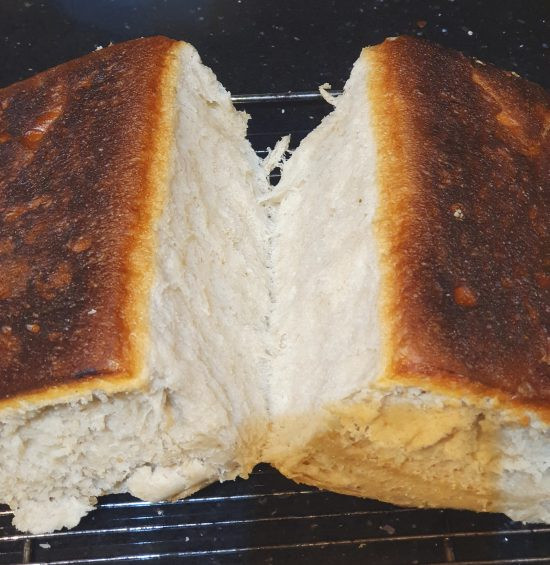 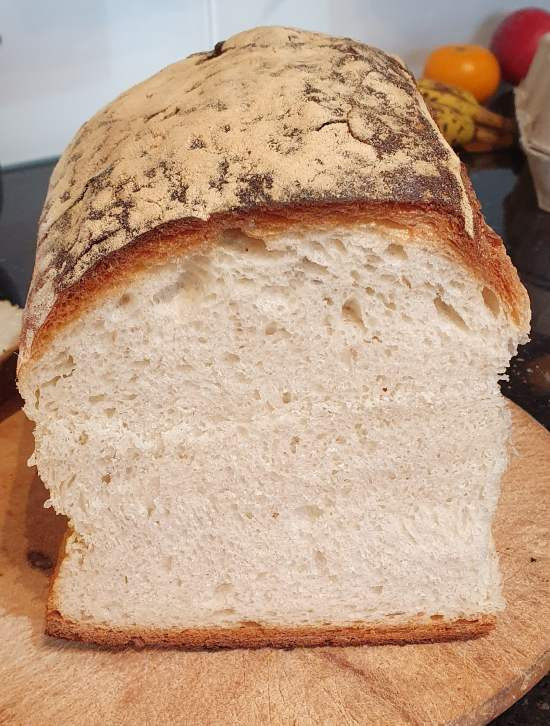 I then read that the frames should be oiled and baked empty for 60 mins at 190C. This certainly eased the sticking problem, especially if the frame is oiled and floured before use.

The second bake was similar to the first, but with the sticking problem more or less solved. This helped the loft. It was a lot bolder, too: 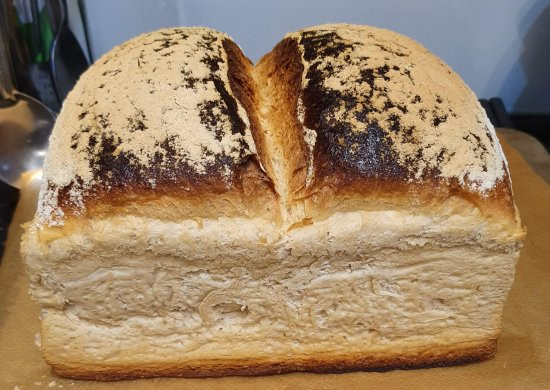 Both bakes had excessively thick bottom crusts. I’d baked  with the frame sat on a thin baking sheet which was then placed on my bake stone. So for bake 3, I did away with the bake stone and used another thin steel baking sheet instead. This worked fine.

I also get fed up of nearly white bread and did a 100% sponge enriched dough with 20% freshly milled heritage wheat (Millers Choice) and SD levain along with the yeast.

This solved the rising problem, but introduced problems of its own, with the loaf sides collapsing in with a doughy strata in there as well.

Probably reducing the hydration will solve this. Another problem is that the outer wall of the loaf (in contact with the wood) never rises as high as the inside wall so the loaves are lop-sided – I think this is a known fact. 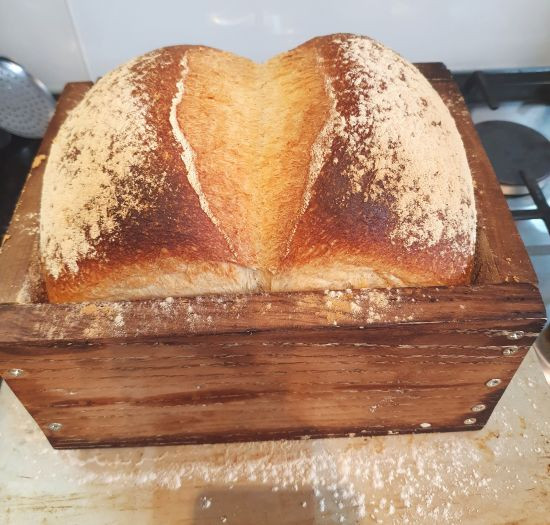 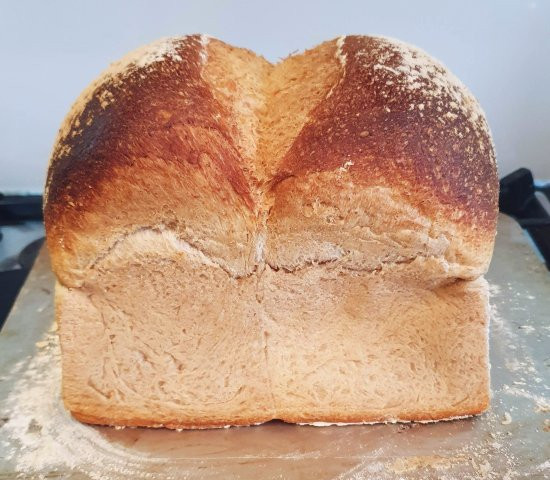 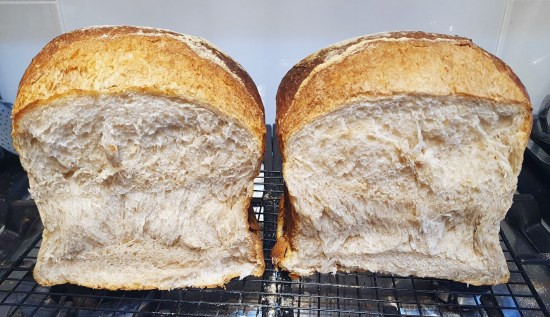 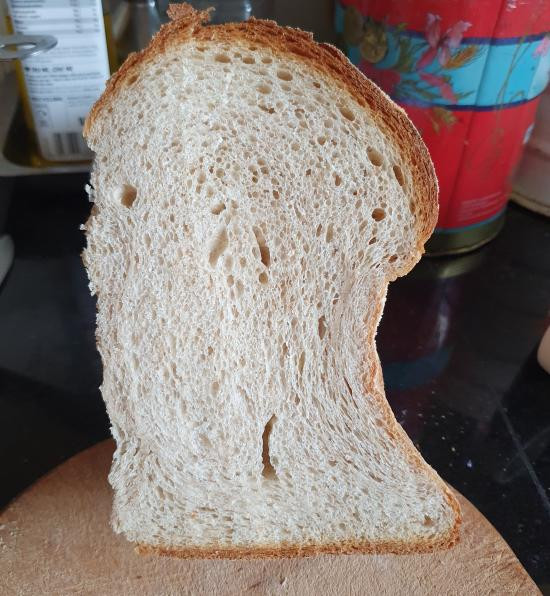 Although this loaf looks worse than the earlier ones, it’s actually very tasty!

So quite a journey – and more to do!

Will I carry on? Sadly, probably not, as I don’t find any advantages in the loaves or their flavour. Some say there is a woodyness or smokiness there, but if so, it’s very subtle.

It’s also quite a chunk of hardware to have lying in the kitchen (somewhere).

Still, it was a good learning curve!