As Dan said, “bad babka” is a misnomer, and I also happen to think a “bad bluerry” bread is a misnomer. But I’m biased in liking fruit in my breads…. And this particular combination of fresh blueberries and lemon zest in the bread is lovely.

As usual, this is a yeast water bread, this time made with apple yeast water. And, like last time, I only did a single build of the yeast water ‘levain’ before including it in the bake as I could tell that the fridge jar of apple yeast water was suitably fizzy and a double build didn’t seem to be necessary. To 137g of apple yeast water I added two different kinds of wholemeal flour: 49g of a hard white wheat wholemeal and 50g of atta flour. To this was also added 129g of a strong bread flour, and it was combined with a danish whisk and finished off by hand kneading and then left for about 11.5 hours to overnight in the proofer at 27°C (80°F) before using in the final dough.

Once again the main recipe is the Hamelman recipe from the community bake. Other than using the single build described above the other main deviation was that I didn’t use the same inclusions as in the community bake but instead used 80g of fresh unprocessed (but washed) blueberries, as well as the fresh zest of one lemon, about 3 tsp worth.

I got something right this time when preparing the final dough – did a short 20 minute autolyse of the flour and water before adding in the levain build and this made all the difference. It only needed about 3 minutes in the stand mixer before the bowl was clean, although I left it running for a total of 8 minutes before stopping the mixer; the salt was added about half way through by pouring it slowly into the running mixer.

Fermentation times were similar or faster than the fast times I’ve seen before with yeast water: 1h30 bulk followed by 1h10 final proof, all done in the proofer at 27°C (80°F). The aliquot was estimated at 50% at the time of shaping and reached up to 225% at the end.

Once again seam side DOWN in the banneton. Struggled to add the seed topping to it because of that. But this time around was so much better! It puffed up into a ball in the banneton during the final proofing. Loading it into the dutch oven was difficult. Even the ‘heave ho’ to lift in the parchment seemed to change the shape it was so jiggly. I was so worried that I’d get another ugly flat bread that 6 minutes into the bake I removed the hot dutch oven, opened it and did a small cross score just to ensure that there was some lift, and yes there was lift! I’ve actually already made another bread after this one, and for that I was bold enough to not do any ‘panic’ scoring and that one seemed to have achieved a nice lift so I’m beginning to trust the seam side down method more now.

Blueberry and lemon is amazing, never tried the combination before. Also think I’ve got a particularly good bag of lemons at the moment as they were also great in the parmesan bread. I should probably have extracted the juice and just used the blueberry skins, there might have been less cavitation. On the other hand the juice brought extra flavour to the loaf. 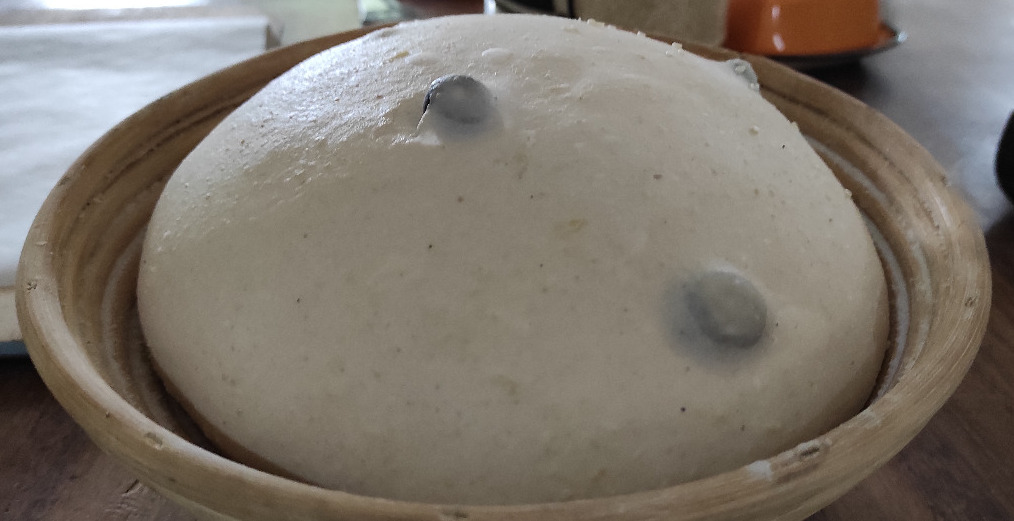