I thought I’d share my all-time favorite brussels sprouts recipe with you. It’s a slightly extended version of the one I included in Super Natural Cooking, but to be honest, calling it a recipe is a bit of a stretch. It involves a skillet, less than five ingredients, about ten minutes of your time, and minimal culinary skills.
What makes this brussels sprout recipe special? It’s so simple. And you end up with vibrant green, tender brussels sprouts that become deeply golden and crusty where they touch the pan. I then lightly dust them with cheese and serve. This time of year it’s not unusual for us to cook them like this two or three times a week. Even if you’re a sprout skeptic, this golden-crusted version has the ability to turn the most vigilant brussels sprout loathers around. 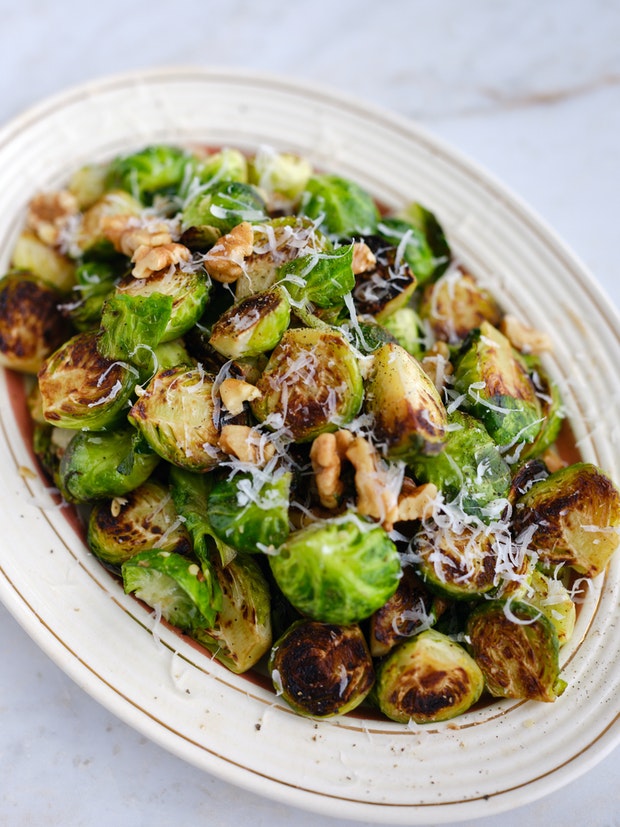 Shopping for Brussels Sprouts: What To Look For

A couple shopping tips before you get started, look for brussels sprouts that are on the small size and tightly closed. The tiny ones cook through quickly. Larger ones tend to brown on the outside long before the insides are done. When the weather is mild, I finish them with a lighter, salty cheese, like Parmesan. If it’s stormy and cold, I opt for a heavier, more melty cheese, like a regular or smoked Gouda (or gruyere). Or(!), I’ll skip the cheese altogether, and add a simple finishing shower of chopped nuts. 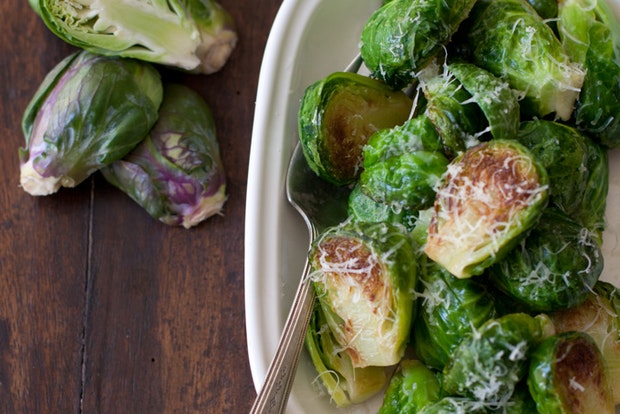 My main quick pro-tip? Try not to overcook the sprouts, and eat them as soon as they come off the stove if at all possible. They’re so great this way!

Many of you have made these over the years, and mentioned variations in the comments. I wanted to highlight a few!

Gina noted, “I made a riff on these tonight that you might enjoy too. I used butter in the pan instead of olive oil, and added about a teaspoon of horseradish at the end and tossed the sprouts in it with the heat off before I sprinkled with parm. I had a similar dish at Coppa in Boston once and have not stopped thinking about them.”

Rachel brought the turmeric angle, “added a little turmeric to my salt and pepper, which brought in a nice flavor as well as a subtle golden glow.”

And Jessa brings the citrus, “the only way I can eat them is roasted with toasted walnuts, and hit with some lemon juice, parmesan, and walnut oil right at the end. I also like zesting orange peel on them.”

And the last two ideas?! Add two finely chopped cloves of garlic in the last minute of cooking, for any garlic lovers out there. Or, toss 2 tablespoons of your favorite pesto into to the skillet just as you finish cooking the brussels sprouts.

There are a bunch of great brussels sprout recipes in the archives. I love the brussels sprouts in this caramelized tofu. Lentil Almond Stir-fry is a great cold weather option. This shredded kale and pecorino salad has a shredded brussels sprout option, the oregano pesto in this recipe is a fantastic wildcard. And this Shredded Brussels Sprouts with Apple recipe is also A+. Enjoy!