The pumpkin adds so much moisture to these chocolate brownies, without all the extra fat and empty calories.

If you like super soft and fudgy brownies, these are your brownies.

Unlike recipes made with oil, the pumpkin also adds fiber and Vitamin A.

Not that anyone’s reason for eating a brownie is to get more Vitamin A… but hey, it’s a nice bonus if you’re eating them anyway!

The pumpkin brownies are a delicious and healthy post-workout choice.

They’re great if you’re the type of person who loves healthy desserts and is looking for a new healthy snack option instead of the usual energy bars or protein bars.

But full disclosure: they are not going to taste as sugary and decadent as traditional brownies, so if you want a brownie recipe to bring to a party or serve to people who aren’t necessarily used to healthy desserts, I’d definitely recommend trying one of the following recipes instead:

You can eat them unfrosted or top the brownies with peanut butter, almond butter, coconut butter, or any favorite frosting recipe.

Or you can simply press some mini chocolate chips on top right before they go in the oven for an easy no-frosting brownie that is ultra chocolatey.

I opted for both frosting and mini chocolate chips in these healthy pumpkin brownies, because I’m indecisive like that.

While I wouldn’t ever serve these pumpkin brownies at something like a Christmas or Super Bowl party, they were perfect for my adventurous and health-minded friends from run club.

Each year at the end of October, we dress up in costumes and run 3-5 miles around the Capitol Hill area of Washington, D.C., followed by a Halloween party with drinks and snacks.

The brownie bars were my contribution to the event this year, and they were well-received after an hour of running on a windy but beautiful 50-degree evening.

Are there any other workout brownie flavors you’d like to see?

Please feel free to leave suggestions in the comments below, because I love hearing your ideas.

Above, watch the video of how to make the brownies

The recipe is a Fall-inspired version of the popular Chocolate Workout Brownies. 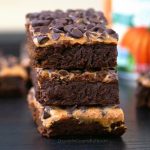 Also be sure to try this Protein Ice Cream.

How To Cook Sweet Potatoes – The Better Way

More About The Cookbook